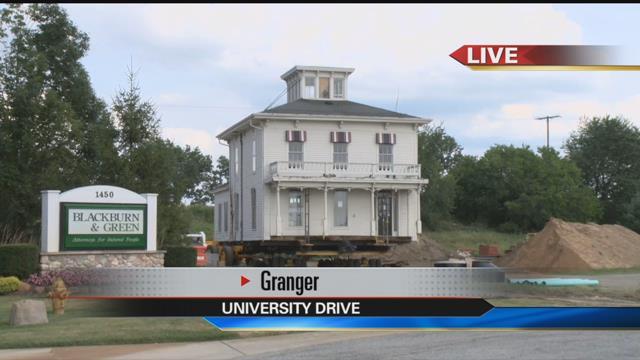 A well-known landmark in Granger has moved to its new home. The move began Wednesday around 10 a.m. and was complete by around 3 p.m.

The 2500-square-foot home was taken east on S.R. 23, just past Heritage Square, to Granger Community Church. From there, it moved east on University Drive to its new location on the end of University Drive Court.

The house had been at the corner of S.R.. 23 and Main Street since 1865. It is one of the oldest houses in St. Joseph County.

Back in the fall, ABC57 talked to the Director of Indiana Landmarks who explained why the landmark could not stay in its current location.

"Obviously it's in a prime corner now one of the busiest commercial corners in St. Joe County, so for it to remain on this site is just not realistic," says Todd Zeiger, Director of Indiana Landmarks.

The move was complete by 3 p.m.