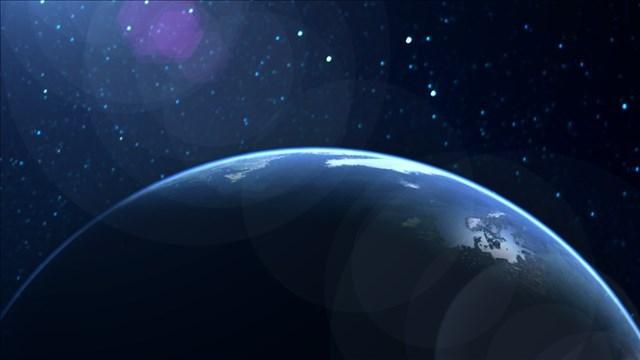 (CNN) -- Welcome to the dark side of the universe. In a direct contrast with the beautifully bright Milky Way galaxy, a "dark twin" called Dragonfly 44 has been discovered 300 million light-years away in the Coma constellation, according to a new study.

But don't cue "Star Wars' " Imperial March theme music or Darth Vader breathing just yet (even if the closeup image looks like a slightly creepy emoji). Although it's massive and mysterious, Dragonfly 44 is really just misunderstood.

Dragonfly 44 went unnoticed until last year because, when regarding the darkness of space, this galaxy resembles a virtually indistinguishable blob. But by looking at it with some of the world's most powerful telescopes, including the Dragonfly telescope array designed and built by study authors Pieter van Dokkum and Roberto Abraham, researchers realized something else. It is named for the telescope that found it.

Dragonfly 44 is an incredibly large but diffuse and dim galaxy. Encircling its core is a halo made up of clusters of stars, much like what we see in the Milky Way. But this galaxy is only 0.1% stars. The Milky Way has more than a hundred times that. The researchers knew that something had to be holding those few stars in place.

"We knew as soon as we discovered the galaxy that it would be so tenuous if it was just made up of stars and no dark matter, that it would quickly disrupt and disappear," said van Dokkum, lead study author and Yale University astronomer.

A huge amount of gravity was working to hold those stars in place, and once researchers used star velocity to measure how much mass the galaxy contained, they realized that the other 99.9% is dark matter.

To put this in perspective, Dragonfly 44 is comparable in size to the Milky Way, which is 100,000 light-years wide. Mostly it is just unseen because it is cloaked in darkness.

"It's very exciting because we thought we had sort of figured out what the relationship is between galaxies and dark matter," van Dokkum said. "This discovery turns that on its head. Now, you can have a hundred times fewer stars in the galaxy with the same amount of dark matter as the Milky Way. That was entirely unexpected, and that means that there is something missing in our description of galaxy formations, and there are physics that we don't yet understand in that process."

This newly observed galaxy could hold the secrets to understanding dark matter, the hypothesized ingredient that makes up 90% of the universe. Given the fact that we know next to nothing about it, this find could open the door to our discovery and understanding of the mysterious building block.

"One of the things we are after are finding galaxies like this that are even closer to us, ideally 30 or 50 million light-years away so we could study them in detail," van Dokkum said. "We could be looking for the dark matter particle itself. Currently, people are looking at tiny dwarf galaxies that circle the Milky Way to search for the dark matter particle with X-ray and UV telescopes, but nothing has been found yet. These galaxies are a million times more massive, so we have a higher chance of detecting a dark matter signal if we find one close enough to us.

"But dark matter is one of the biggest mysteries in science. We don't even know if it is a particle or not. It's a bunch of steps from where we are now. For us, it's finding the best candidates. It would be incredibly exciting if it helps the search in that way."

The invention and building of the Dragonfly telescope came out of a dinner conversation between the two men, that led to a bet in 2011. It has grown from one lens in a parking lot to an array of 48 lenses with a coating that enables them to do special imaging of these faint galaxies.

Abraham, a professor of astronomy at the University of Toronto, is credited with putting the telescope together. Van Dokkum also has a background in photography, which enabled him to help with selecting the lenses.

As it happens, in his spare time, he uses his photography skills to capture images of the underappreciated dragonfly. He calls it a "strange confluence of work and hobby," considering the name of the galaxy and telescope.

Using their Dragonfly telescope, van Dokkum and Abraham will continue their research by surveying a random large batch of the sky rather than targeting of particular galaxies or groups of galaxies, as they had been doing.

"We built this telescope to try to uncover what's out there," van Dokkum said. "What other things have we missed that are right above us?"