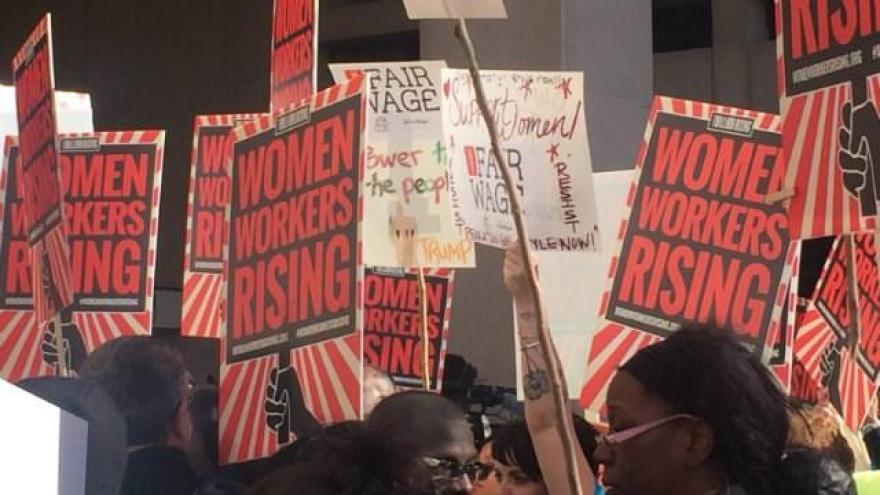 (CNN) -- Organizers say it was intended in the same spirit of "love and liberation" that inspired women's marches worldwide.

But many are complaining that "A Day Without a Woman" will leave many women in a bind.

The national strike movement on Wednesday coincides with International Women's Day. It aims to draw attention to inequities working women face compared to men, from wage disparity to harassment to job insecurity.

Several school districts across the country are closing to allow staff and teachers the chance to participate. While some people in those communities applauded district leadership for the show of solidarity, others criticized them for leaving working families scrambling to find childcare.

Parents in Prince George's County Public Schools in Maryland were especially irate after the district announced school closures at the last minute on Tuesday night.

"This is absolutely infuriating and uncalled for. Who gets punished here? The students. Especially those students who rely on the schools for food during the day. And never mind the fact that you've inconvenienced parents who now have to scramble for daycare at the last possible minute," one person said on the district's Facebook's page.

"This last-minute decision does a disservice to anyone in a family where both parents work full-time. What does ACPS expect those families to do about child care with such little notice? It also does a disservice to working women outside of ACPS, who now may be forced to stay home with their children."

The complaints bore echoes of a broader debate about the strike's message if only those who can afford to take the day off participate.

Similar criticisms were leveled at the Women's March on Washington for being a movement that appealed to people in positions of privilege.

"The lack of advance notice puts parents in a tight spot. I'm fortunate enough to have a job that will let me take paid leave to care for my son during an unexpected day off. So personally, I'll be fine. But many parents are not in that position," as one person said on Alexandria City Public Schools' Facebook page.

Striking is not the only way organizers are encouraging people to participate. People are encouraged to avoid shopping -- "with exceptions for small, women- and minority-owned businesses -- or to wear red in solidarity.

And, for many, the inconvenience was worth the bigger message.

"Way to go Teachers! The whole point is to make people realize what an inconvenience it is when Women don't show up. You are doing a brave and great thing. Thank you. (From a parent who is facing said inconvenience!)" said a parent on the Facebook page of Chapel Hill-Carrboro City Schools in North Carolina, which announced the closure March 2.

As another parent said on the ACPS Facebook page, "I'm a working mom, hourly employee, and I support this decision. I'm proud of our ACPS teachers for their solidarity and taking a very visible stand in these troubling times."