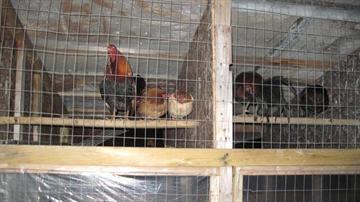 Deputies received a tip that there was cockfighting going on at a property on 48th Avenue in Lawrence Township.

Deputies went to the home and the owner showed deputies roosters and hens he raised.

While being shown the roosters, deputies noticed blood and feathers in the dirt of the pole barn, according to reports.

Deputies say they also found a stolen quad runner in the pole barn.

After getting a search warrant, deputies say they found a large amount of cash, an area used for cockfighting, 18 dead roosters, the quad runner, a stolen mini bike, paraphernalia and paperwork related to cockfighting and some possibly stolen tools.

A pretrial date was set for March 12.