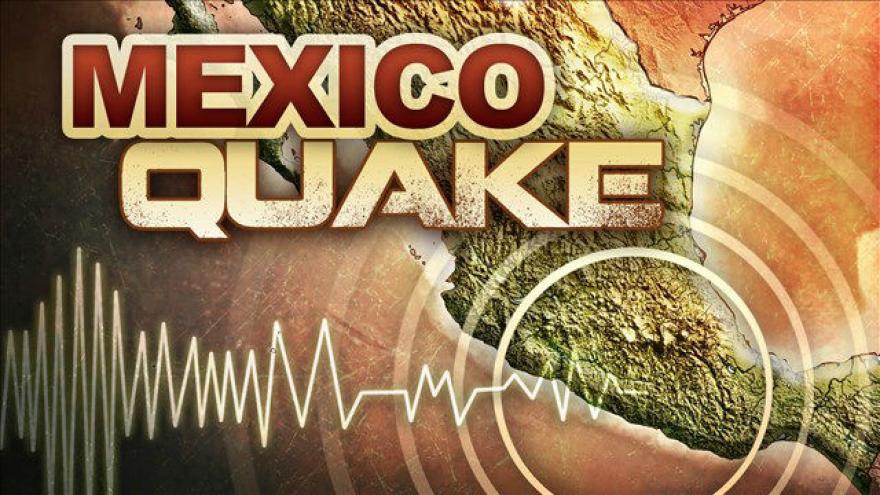 The quake, which was felt as far as Mexico City and Guatemala City, struck 74 miles (120 kilometers) off the Pacific Coast at 12:49 a.m. ET Friday.

(CNN) -- At least 29 people have died after the most powerful earthquake to hit Mexico in a century struck off the country's southern coast.

The magnitude-8.1 quake, which was felt as far as Mexico City and Guatemala City, was registered off Mexico's southern coast just as heavy rains from Hurricane Katia lashed the east. The epicenter was in the Pacific Ocean, some 600 miles (1,000 kilometers) southeast of the capital and 74 miles (120 kilometers) from the Pacific coast.

It hit just before midnight on Thursday, when many people would have been sleeping.

Alejandro Murat, the governor of Oaxaca, told CNN that 23 people were killed in his state alone. Four others have died in Chiapas state and two in Tabasco.

-- The states of Chiapas, which borders Guatemala, and Oaxaca were closest to the quake. Peña Nieto said three people died Chiapas and two in Tabasco. Multiple homes in Chiapas collapsed, Peña Nieto said.

-- The United States Geological Survey (USGS) Pager system, which predicts economic and human loss after earthquakes, issued a red alert. "High casualties and extensive damage are probable and the disaster is likely widespread. Past red alerts have required a national or international response," it said.

-- A tsunami was confirmed in Mexico, with one wave coming in at 3 feet (1 meter), according to a tweet from the National Weather Service's Pacific Tsunami Warning Center. It said tsunami waves taller than 10 feet (3 meters) could hit coast of Mexico, while 3-foot waves could reach as far as Ecuador, New Zealand and Vanuatu.

-- 1.85 million homes lost electricity, but 74% of them have had service returned, Peña Nieto said.Some people are lacking water service, and it may take 36-48 hours to get it back up and running.

-- The USGS has reported multiple aftershocks,including at least five with tremors measuring above 5.0 in magnitude.

Gonazalo Segundo was awoken by the shaking.

"I was already in bed. I was in my place so we were expecting to have a tranquil night but suddenly ... everything breaks apart, glasses, furniture and everything," he told CNN over the phone from Chiapas.

The quake had a depth of 69.7 kilometers (43 miles), according to the USGS, which makes it particularly shallow, according to Jana Pursely, a geophysicist at the USGS. That means more intense shaking.

The states of Chiapas and Oaxaca, home to at about 9 million people, are both located close to the earthquake's epicenter. They are two of the most impoverished areas in Mexico, and were likely hit the hardest.

"We have experienced earthquakes before, but not like this. It was so intense," Segundo said. "We are alive, that's the important thing."

Many of those in Chiapas may not have been so lucky. The earthquake struck in the early hours of the morning when most people would have been sleeping. Chiapas is Mexico's poorest state.

Pursely of the USGS told CNN she expects damage along the coast, meaning a costly cleanup could be on the way. These types of shallow quakes have the potential to be very dangerous, she said.

CNN attempted to contact two seaside hotels in Chiapas but the lines appeared to be down.

Chiapas Gov. Velasco told Foro TV that there have been reports of damage, including hospitals that have lost power and buildings with collapsed roofs. He said that he will cancel school on Friday.

It appears even the capital, hundreds of miles away, was not spared from the quake's tremors. Mexico CIty Mayor Miguel Angel Mancera said parts of the city are without in an interview on Foro TV.

Videos on social media showed significant tremors in various parts of the country as well as major damage to buildings and infrastructure, including traffic lights shaking.

Paulaina Gomez-Wulschner was driving when it struck. She heard an earthquake alarm go off on the radio, parked her car and joined others stood in the middle of the street to avoid falling objects.

"This was a very, very strong earthquake, one of the strongest I've felt, and I was here in 1985 when that earthquake collapsed Mexico City," she told CNN."It was very scary," she said.

Gomez-Wulschner said she could hear sirens, ambulances and helicopters in the aftermath, but did not see any immediate damage near her.

But a receptionist at the Intercontinental in Mexico City said he only felt light shaking.