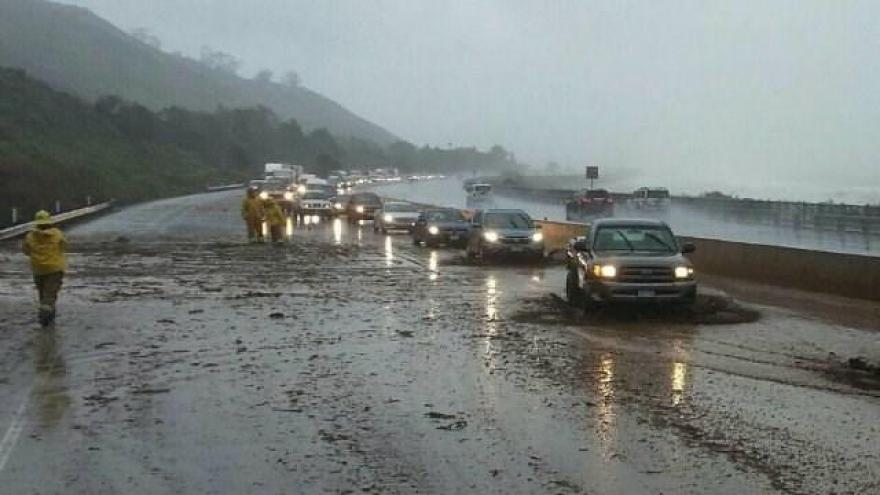 (CNN) -- Torrential downpours were inundating Southern California on Friday, flooding streets and prompting water rescues. Officials said at least two people had died in the storm. One was found in a vehicle that was under water.

Here are the latest developments from one of the worst storms in the area in recent memory:

• A motorist in Victorville was found dead when San Bernardino County firefighters searched a submerged car. The department didn't give any details about the victim.

• Eight people were rescued when 10 vehicles got stuck on a road in Sun Valley. No one was injured, the Los Angeles Fire Department said.

• It was snowing heavily at higher elevations. "Chains required in all mountain areas. Unknown duration," tweeted the California Department of Transportation office for Riverside and San Bernardino counties.

• The National Weather Service in San Diego said a "severe squall line" was moving through Orange County and was approaching San Diego County. One wind gust was 75 mph.

• Duarte, a city northeast of Los Angeles, said residents of 200 homes were under a mandatory evacuation order.

• The Ventura County sheriff's air unit said that it has rescued three people who had been trapped on an island in a river. A helicopter crew was still searching for a missing person, it said on Twitter.

• More than 470 flights that originated at Los Angeles International Airport or were due to land there had been delayed and more than 130 were canceled, according to the flight tracking website FlightAware.com.

• Santa Barbara Airport has one closed runway. "The main airfield is under water and is closed for commercial activity," director Hazel Johns said. Runway 7 has 6 to 9 inches of water on it. Some employees were prevented from getting to work by road closures. The terminal is above the flood, Johns said.

• More than 116,000 customers in Southern California had lost power as of about 6 p.m. PT, officials said.

• A tweet from the Cleveland National Forest account showed an SUV with water almost up to the top of the rear wheel well. "The OC/Trabuco area is already experiencing some flooding. Be careful when driving and stay off the roads, if possible," the agency wrote.

An inch of rain an hour

Flash-flood warnings were in effect for Orange, Riverside and San Bernardino counties, the National Weather Service said. Parts of Los Angeles and Ventura counties were under a similar watch.

The rain was so furious a parking garage in Los Angeles turned into a waterfall.

In southwest California, the National Weather Service warned the area will see the strongest storm to hit this season. "It is likely the strongest within the last six years and possibly even as far back as December 2004 or January 1995," the weather service said.

Rainfall totals by the National Weather Service showed that parts of Santa Barbara County have already seen more than 7 inches of rain in the past two days. Parts of Ventura County have seen totals of more than 6 inches.

While these areas will see the bulk of rain before the end of the weekend, parts of northern California can expect a storm late Monday into Tuesday. The question is how much impact that might have on Oroville Dam's damaged spillway.

"The Oroville Dam and areas around it will see some rain Friday, but the bulk of the rain has shifted south. ... Unfortunately, it looks like another storm will pound the region again on Monday," said CNN senior meteorologist Dave Hennen. "Over the next week, areas around the dam could pick up another foot of rain, which will again likely raise the lake level."

Earlier this week, authorities ordered evacuations over concerns that an emergency spillway at the dam could fail and threaten nearby communities.

On Tuesday, officials downgraded the evacuation order to a warning, allowing 188,000 evacuees from Butte, Sutter and Yuba counties to return home.

Parts of the south-facing foothills and coastal mountain slopes could see up to 10 inches of rain through the weekend, meteorologists said.

"The incessant heavy rains, expected to reach up to 1 inch per hour, will dramatically increase the threat of urban flooding, as well as mud and debris flows from recent burn areas near mountainous terrain," CNN meteorologist Derek Van Dam said. "The highest elevations of Los Angeles and Ventura counties will likely experience 1 to 2 feet of snow, with near hurricane-force winds near the tops of mountain overpasses."

Oroville Dam 'is holding up'

The weather brings more worries for communities south of Oroville Dam. Rainfall over the next seven days could total more than 12 inches.

But on Friday, officials were optimistic the dam and lake could handle the upcoming rain.

"We have generated a large volume of storage space so we can take on a very big storm," Croyle said.

The threat level has been reduced for residents living near the dam, but Butte County officials on Wednesday advised those returning to their homes to "remain vigilant and prepared."

"The dam is holding up, it's structurally sound," said Jay Smith, a spokesman for the California Department of Forestry and Fire Protection.

But Hennen, the CNN meteorologist, said, "The next week of storms could potentially bring hundreds of billions of gallons of water into Lake Oroville, adding pressure back onto the already compromised structure of the concrete spillway and emergency spillway next to Oroville Dam."

Evacuation warnings remain in place for Oroville and Thermalito as well as "all low-lying areas around the Feather River, which includes Gridley, Biggs, Yuba City, Loma Rica, and anywhere south of Butte County along the River," according to the Butte County Sheriff's Office website.

The Butte County Sheriff's Office said 578 inmates had been transferred to the nearby Alameda County Jail.