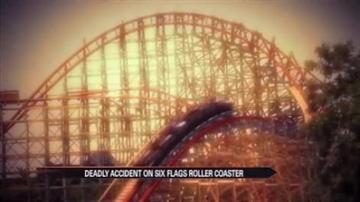 TEXAS — A mother fell to her death while riding the Texas Giant roller coaster at Six Flags Amusement Park.

There were people on that ride and in line for the ride who saw the whole thing unfold.

That coaster is considered one of the tallest steel coasters in the world.

Investigators haven't commented on the ride's restraint system yet, but say it it is not a criminal investigation.

"It didn't hit me until we got back down to the bottom, and I said, like, she was no bigger than I was," said witness Carmen Brown. "And then I like, I lost it."

And that wasn't the only accident an an amusement park Friday night. A thrill ride malfunctioned at Cedar Point in Sandusky, Ohio.

A boat on its Shoot the Rapids ride rolled backwards and flipped over in water, trapping and injuring seven passengers. All seven people onboard were taken to the park's first aid station.

Park officials are investigating the incident.