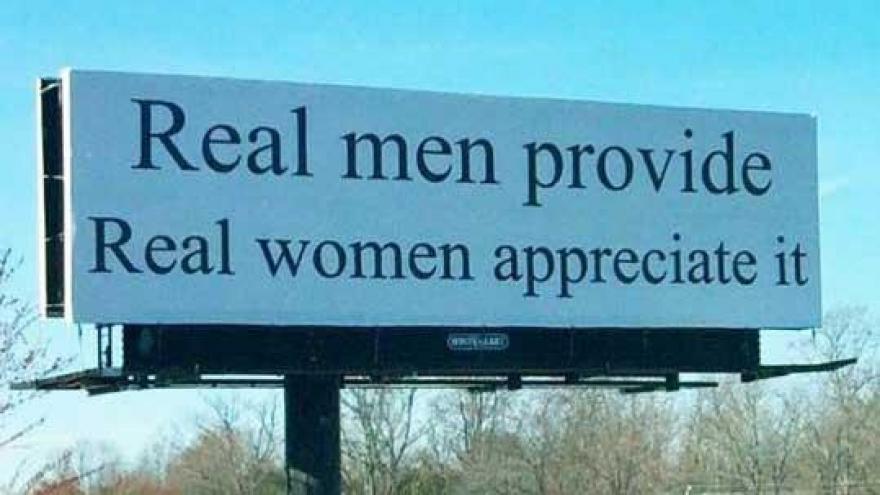 A billboard containing those words sits along an interstate in North Carolina, and it's inflaming passions. Some people find the message sexist.

A group of those who don't like the billboard's message plan to hold a protest this weekend.

Molly Grace says she's never organized a protest before, but she's putting one together now after seeing the billboard earlier this week.

Grace, who owns a clothing and lifestyle store in Winston-Salem, says the point of the protest isn't to bring the billboard down (although she wouldn't be sad to see it go) but to rail against the message behind it.

"We are not protesting the right to have a billboard or express a message on it," she told CNN. "This is only a protest against the type of thinking that creates a message like that."

Grace, who took to Facebook to organize the protest, feels the message promotes patriarchy and sexism and an antiquated way of thinking about women.

"We are protesting the implied demand that women be silent and appreciate, regardless of whatever circumstances, their role as non-providers," she wrote in the post.

Or, as she later told CNN, that women should "shut up and smile and be grateful for what this man does for you."

Originally the protest was going to be held Sunday morning directly under the billboard, but that would have protesters standing directly next to a busy interstate, so for safety's sake, Grace is moving it to somewhere in downtown Winston-Salem.

So far a couple of hundred people have said on Facebook that they will attend.

So who put the billboard up?

Bill Whiteheart knows, but he can't reveal who it is. Whiteheart, president of Whiteheart Outdoor Advertising, says the group that rented the billboard wants to stay anonymous, for now.

Whiteheart would say the billboard cost the group about $2,000 and was put up Friday morning. The billboard is rented for 30 days but can be renewed to run longer if the group desires.

He stressed that the message on the billboard shouldn't be confused as coming from his company.

"We're not supportive of or in opposition to the message," he told CNN. "We're just the messenger."