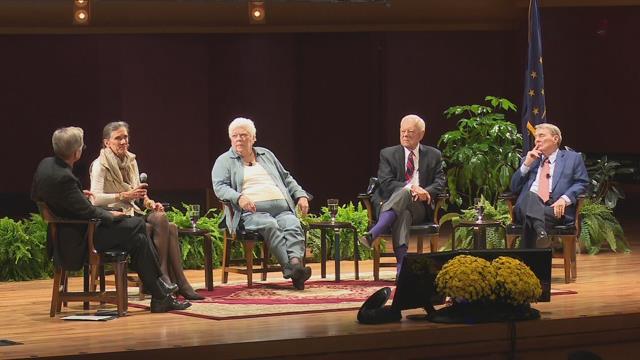 At Notre Dame’s forum on presidential debates, the executive overseeing the debates responded to Donald Trump’s claims of a rigged system, and Father John Jenkins offered his advice to Gov. Mike Pence.

The upcoming presidential debates are high stakes, and Republican presidential nominee Donald Trump has repeatedly claimed the debates, and the moderators running them, will be rigged against him.

At a forum held Wednesday night on the Notre Dame campus, the executive director of the Commission on Presidential Debates responded to Trump’s remarks.

“We go out of our way to select moderators who are professional, independent, experienced journalists who have had extensive time on live television doing hard news,” Janet Brown, the executive director of the commission, said. “[The moderators] bring their independence, as well as their commitment to neutrality and objectivity to these debates. They’re representing the American public. We’re confident that they will do the same, fair, professional job of covering the issues that all of our moderators have done in the past.”

The moderator of Wednesday night’s event was Notre Dame President Father John Jenkins, who is also a member of the commission for the debates.

He said the following when asked what it’s like to have fellow Hoosier Mike Pence participating in the upcoming vice presidential debate, and what his advice is for the governor:

“The great thing, and I know Mike Pence, and it will be great to see him in these debates,” Father Jenkins said. “The thing about these debates, it’s hard not to reveal who you are, so my advice to Governor Pence, as to all the candidates, be yourself. Ultimately the American people have to decide, so come in, and be yourself.”

Father Jenkins added, “I don’t know of any events that are more influential on the outcome of the election and who will be our leader.”

A big theme of the forum was how much of a privilege it is to live in a country where the power to vote and view debates exists.

The panelists made clear that everyone should tune in to watch and learn from the debates, and vote in November.