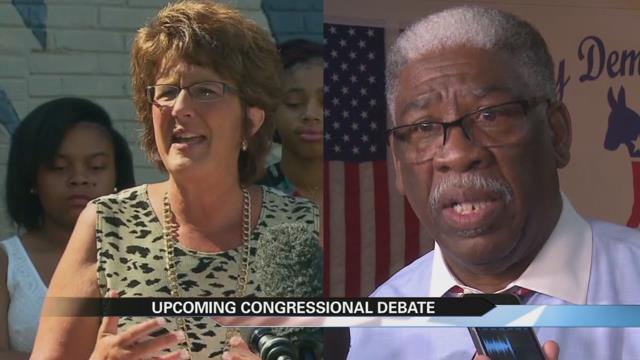 Days before their first and only debate, tensions between Lynn Coleman and Congresswoman Jackie Walorski heat up as Coleman questions debate logistics.

Coleman held a press conference at the St. Joseph County Democratic Headquarters to criticize his opponent, Republican Congresswoman Jackie Walorski, ahead of their one and only debate scheduled for November 1st.

“It’s been extremely, extremely disrespectful to the voters and to the people in this district not having an opportunity to engage with our opponent,” Coleman said.

He is upset the debate will be held in Wabash County, where it’s being sponsored by the local farm bureau office that endorsed Walorski.

Coleman is also upset that the moderator of the debate is a former Republican state house colleague of Walorski’s, and the radio station broadcasting the debate is WKUZ in Wabash – its coverage zone only going as north as the middle of Kosciusko County.

Coleman said Walorski has declined invitations to three other debates across the district.

In an emailed statement, Walorski – who was out of town Wednesday – said, “I was pleased to take part in WNIT’s recent televised candidate forum, and I look forward to the upcoming radio debate to discuss the issues that matter most to 2nd District Hoosiers and the work I’m doing to protect Americans from terrorism, keep our economy strong, and make the VA work for veterans.”

The debate moderator is Republican Bill Ruppel, who said in a phone interview that he has not endorsed Walorski or donated to her campaign.

Ruppel promised a fair and balanced debate, despite claiming Coleman has been attacking him, even after, according to Ruppel, Coleman agreed to the debate guidelines.

“I’m going to make this as fair as humanly possible,” Ruppel said.

Coleman said he’s not happy about the debate logistics, but he agreed to it because it’s his only chance to debate his opponent face-to-face.

“We agreed to do it anyway because the public deserves to hear from their candidates and to have an opportunity to understand what and how they feel about different issues,” Coleman said.

Tuesday’s debate in Wabash County is closed to the public and to the media, but there will be a meet-and-great for the public right after the 7 p.m. debate.

You can submit questions online until Friday, October 28 at noon by clicking here.

Coleman said he heard the moderator was throwing those voter-submitted questions out, but Ruppel said he’s only disregarding questions that are attacks on both candidates because he wants to stick to the issues.

If you live outside of WKUZ’s coverage zone, you can still listen to the debate on their website or through the “TuneIn” radio app.