Decision on superintendent may be delayed 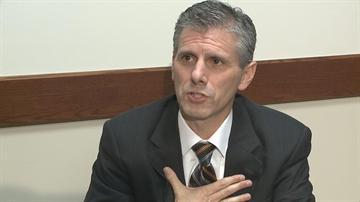 SOUTH BEND, Ind. – Though trustee board members have yet to decide on whether to pick from one of their finalists or continue their search Robert Haworth, one of two finalists considered for the position of Superintendent of South Bend Community School Corporation, went through the final interview process before education focus groups on Thursday.  Haworth laid out his case for why he should become the new head of South Bend schools.

“I think that coming here I can bring an approach of servant leadership that unites community for student achievement and that’s what’s exciting about this position,” Haworth explained.

Haworth currently serves as Superintendent of Valparaiso Community Schools; previously he served as superintendent of Warsaw.  One criticism surrounding Haworth’s consideration for the superintendent position is that he doesn’t have much experience in “urban” school districts.

“The problems that can be faced in big cities can also be face in other areas,” Haworth explained, describing his experience in Warsaw.  “"We were dealing with poverty and when you deal with poverty, from an educational standpoint, you have to be able to provide hope…here there is hope."

Haworth explained that the hope he spoke of is South Bend’s numerous colleges and universities that can provide inspiration and resources for students.

Numerous schools in South Bend have either narrowly avoided or are currently in danger of state takeover.  Though Haworth explained that he’s never faced situations of schools being taken over, he did face state intervention in some school curriculums when serving in Warsaw.

“What we did to address that issue was we started to look at our data more carefully, the state intervention forced us to look internally,” he explained.  “What was created out of that, in my mind, was a professional learning community so that it would not happen again and I would like to examine the possibility of looking at professional learning communities, if given that opportunity, here.”

One of the biggest challenges Haworth expects to face, if selected to be superintendent, is financing.  With hundreds of students leaving South Bend schools under the voucher program, money is also being lost.  His solution

“I think we have to address that not only through marketing campaigns, but with what we’re doing in the classrooms,” he explained.  “If our parents and our students that we are not just meeting expectations, but exceeding expectations, they will bring those students back and others will come here to join them.”

Haworth plans to raise the bar for schools raise their competitiveness.  He said his experience as a basketball coach may come in handy.

Another concern raised regarding Haworth’s application to be superintendent is the fact that his previous superintendent positions have been short.  But, he said his goal in South Bend, if selected, is to leave a legacy, something that won’t be done quickly.

"I would like to be able to come here and say, after 20-years of service, our students were better off because Rob Haworth was the Superintendent here," he described.

At an executive session on Friday, the South Bend Community School Corporation's Board of Trustees is scheduled to vote to decide on the next superintendent.  Though Haworth and Interim-Superintendent Carole Schmidt are the two finalists, board members have been urged to take a second look at 17 other applicants and then decide on whether to continue the search for a superintendent or select Schmidt or Haworth.