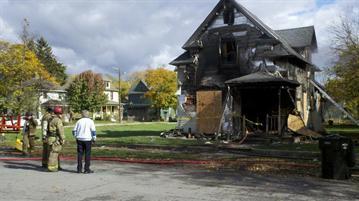 SOUTH BEND, Ind. – On Thursday, a South Bend house caught fire for the second time in less than 24 hours! It's a story we first broke Wednesday night on ABC 57 News at 6.

Two young boys were forced to jump from a second story window of their burning home into a neighbor's arms! On Thursday, the attic sparked again! Firefighters were able to get the flames under control. They say strong winds may have led to the second burst.

"Easily that can have an ember that could stay in there for a period of time. High winds today evidently this is an assumption, but we believe that's probably what caused it to start the fire once again,” said Capt. Bob Means with the South Bend Fire Department.