Dellia Castile's criminal past is uncovered 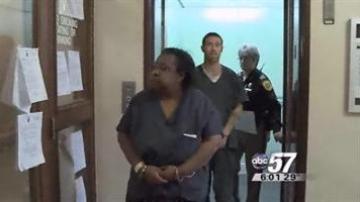 Castile is Sturgis' grandmother. Her son, Terry Sturgis, is charged with Tramele's murder.

On Dec. 6, the presiding judge in Castile's trial made note that Castile has a criminal record in Cook County, Ill.

ABC 57 obtained the court documents from Cook County. They show that Castile was charged with 2 counts of attempted murder and 6 counts of aggravated battery in 1992.

Further investigation with Chicago Police Department showed that Castile was arrested on April 23, 1992 at an elementary school in Chicago.

Through a lengthy trial, Castile entered a plea deal for 2 counts of aggrevated battery.

She was sentenced to 10 years in prison and 1 year of parole.

However, she only spent 19 months behind bars.