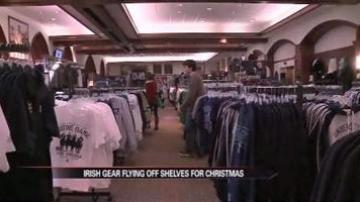 SOUTH BEND, Ind. -- Excitement about Notre Dame sports is catching on this holiday season. Move over red and green, fans are going blue and gold this Christmas.

Demand for Notre Dame apparel and goods has skyrocketed in the past month, reaching historic levels.

The Hammes bookstore is answering about 200 phone calls an hour.

"I had two sons who graduated from here, one in ‘78 one in 1980 and I had a daughter that went to Saint Mary’s. I had a granddaughter graduate from here in 2006,” said Kinsella.

But at 80 years old, Kinsella is about as dedicated a fan as they come.

"I have season tickets for hockey, football, girls basketball and boys basketball. So whenever there's two or three games together, we'll come out,” said Kinsella.

After watching years of Irish athletics, even Kinsella says this season is special.

"It's just been unbelievable, it's a dream year,” said Kinsella.

He's certainly not alone. Irish fans, whether they're lifers or just jumping on the bandwagon, can’t get enough blue and gold.

"The order volume, whether it's online or in stores has quadrupled which is a phenomenal number when you think about it, so the excitement that the fans have right now is off the charts,” said Keith Kirkpatrick, Director of Retail Operations for Hames Bookstore.

But Kinsella says the Notre Dame demand is more than just excitement, it’s about pride.