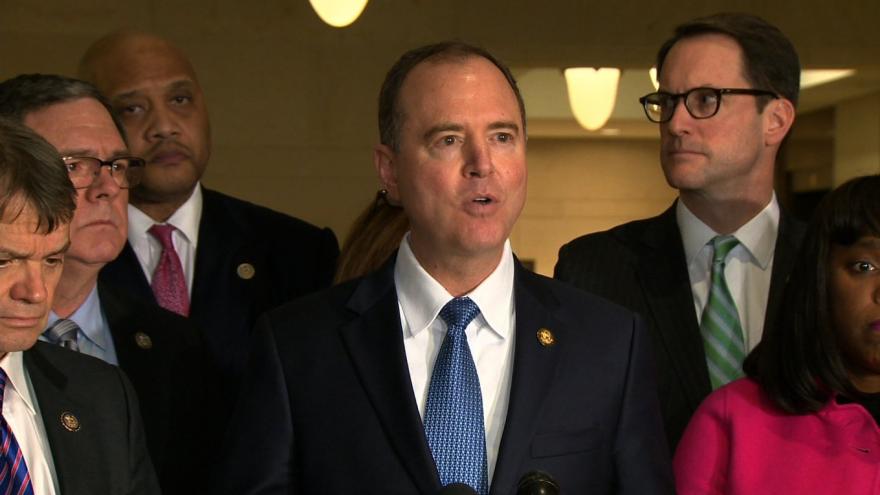 The committee made the Democratic memo public after the White House signed off following negotiations between the FBI and the committee's top Democrat, Rep. Adam Schiff of California, over what in the document should be redacted.

Earlier this month, the White House objected to releasing the memo, saying that sensitive material had to be removed first.

Schiff's memo was written to rebut a Republican memo that accuses the FBI of suppressing Democratic ties to an opposition research dossier on then-candidate Donald Trump and Russia used in the FISA warrant for former Trump campaign foreign policy adviser Carter Page.

The memo defended both the FBI and Justice Department's role in obtaining the FISA warrant — agencies that have been under fire from Republican critics who have also sought to discredit special counsel Robert Mueller's investigation.

"The Democratic response memo released today should put to rest any concerns that the American people might have as to the conduct of the FBI, the Justice Department and the FISC," Schiff said in a statement. "Our extensive review of the initial FISA application and three subsequent renewals failed to uncover any evidence of illegal, unethical, or unprofessional behavior by law enforcement and instead revealed that both the FBI and DOJ made extensive showings to justify all four requests."

The White House said in a statement that nothing in the Democratic memo counters Trump's statements that neither he nor his campaign colluded with Russia.

"While the Democrats' memorandum attempts to undercut the President politically, the President supported its release in the interest of transparency," the statement read. "Nevertheless, this politically driven document fails to answer serious concerns raised by the Majority's memorandum about the use of partisan opposition research from one candidate, loaded with uncorroborated allegations, as a basis to ask a court to approve surveillance of a former associate of another candidate, at the height of a presidential campaign."

Later Saturday evening, Trump tweeted: "The Democrat memo response on government surveillance abuses is a total political and legal BUST. Just confirms all of the terrible things that were done. SO ILLEGAL!"

Schiff and other Democrats charge that the Republican memo led by House Intelligence Chairman Devin Nunes of California is misleading and omits key facts, including that the FISA application did state that ex-British intelligence agent Christopher Steele, the author of the dossier, was paid by a political entity. FBI Director Christopher Wray also expressed concerns about the Nunes memo, publicly warning the White House that omitted information could impact the memo's veracity.

Speaking Saturday afternoon at the Conservative Political Action Conference, Nunes said that he wanted the Democratic memo released "because we think it is clear evidence that the Democrats are not only trying to cover this up, but they're also colluding with parts of the government to help cover this up.

"So what you basically will read in the Democratic memo is that they are advocating that it's okay for the FBI and DOJ to use political dirt paid for by one campaign and use it against the other campaign," Nunes said.

In a written statement, Nunes added that "the FISA court was misled about Mr. Page's past interactions with the FBI in which he helped build a case against Russian operatives in America who were brought to justice. It defies belief that the Department of Justice and FBI failed to provide information to a secret court that they had provided to an open federal court regarding their past interactions with Mr. Page."

Two of the key arguments in Schiff's memo are that the FBI's request for a FISA warrant on Page was proper, and that the political motivations behind Steele's research were sufficiently disclosed.

The Schiff memo cites the FBI's previous interest in Page, including a March 2016 interview with him about his contact with Russian intelligence.

"The FBI's concern about and knowledge of Page's activities therefore long predate the FBI's receipt of Steele's information," the memo states.

The memo also argues that Steele, who authored the dossier on Trump and Russia, played no role in the FBI's launching of the counterintelligence investigation into Russian interference in the 2016 election, which occurred on July 31, 2016.

"Steele's reporting did not reach the counterintelligence team investigating Russia at FBI headquarters until mid-September 2016, more than seven weeks after the FBI opened its investigation, because the probe's existence was so closely held within the FBI," the memo states.

By September 2016, the memo says, the FBI had already opened "sub-inquiries" into a number of Trump campaign associates beyond Page, although the number is redacted.

In the three subsequent FISA renewals, the Justice Department provided information "obtained through multiple independent sources" that corroborated parts of what Steele reported about Page, the memo states, though many details of that section are redacted.

The memo states that Steele's role was properly disclosed in the October 2016 FISA application, including his political motivations. The Republican memo argues that the FISA application failed to note that Hillary Clinton's campaign and the Democratic National Committee were indirectly paying for Steele's research.

The memo notes that when the FISA application was first filed, Steele was not told by Fusion GPS co-founder Glenn Simpson that Clinton's campaign and the DNC were paying Fusion GPS for his research.

"As clearly stated in the GOP memo, none of the Page FISA applications 'disclose or reference the role of the DNC, Clinton campaign, or any party/campaign in funding Steele's efforts,'" the Republican document states. "Instead, the FISA application relies on a convoluted statement buried in a footnote. This is clearly an attempt to avoid informing the Court, in a straightforward manner that the DNC and Clinton campaign paid for the dossier."

The release of the Schiff memo caps an unprecedented and tumultuous period for the committee, which has now voted to release two classified documents using an obscure committee rule that had never been invoked previously in the panel's history.

Trump indicated he wanted the Republican memo out — over the objections of the FBI and Justice Department. The committee rule puts the decision to object to releasing the classified material in the hands of the President, and he declassified the Republican document without changes.

But the White House objected to releasing the Democratic memo, citing the concerns about releasing sensitive information, and called for redactions before it could be made public.

That set off a period of negotiations between the Democratic committee staff and the FBI.

Schiff had warned he was concerned the White House would make "political redactions," but a senior Democratic committee official said that the redacted document released Saturday "came back clean" from Justice Department and the FBI.