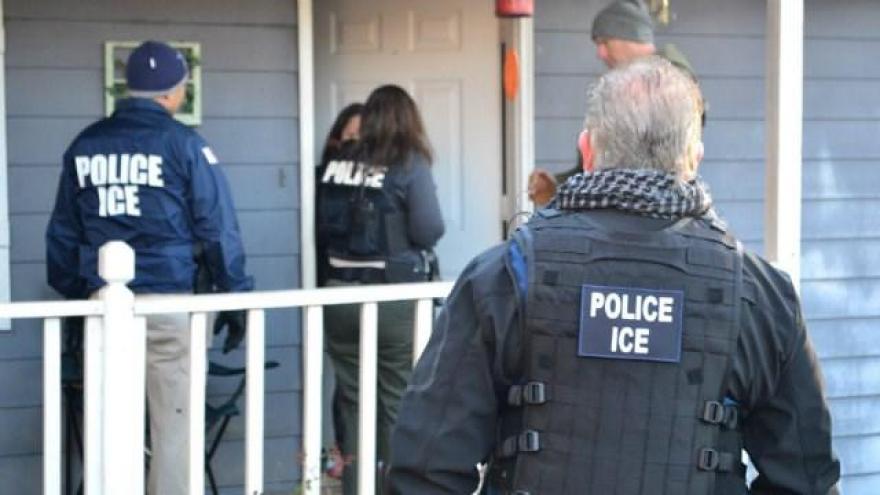 Fear is running high among immigrant communities since President Donald Trump's inauguration -- and after the recent publicized deportation of an undocumented Arizona mother of two after a routine visit with immigration officials, reports have been spreading of Immigration and Customs Enforcement stepping up its actions in the Southwest.

The actions are the first concerted effort by ICE under the Trump administration to arrest targeted undocumented immigrants for deportation proceedings.

It's unclear at this point in the nascent administration whether it was a sign of things to come, or whether the actions were conducted under any different procedures than could have been in place under the Obama administration.

Trump claimed credit for the raids Sunday, tweeting: "The crackdown on illegal criminals is merely the keeping of my campaign promise. Gang members, drug dealers & others are being removed!"

It was the uncertainty, the publicity of the raids and the high tensions raised by public comments on immigration by Trump administration officials that had Democrats asking for more information.

"These activities have caused fear and uncertainty for many of constituents," Correa wrote, and listed 10 questions for ICE, among them "What are the agency's priorities for removal? and "How far in advance were these enforcement activities planned?"

"This operation was in the planning stages before the current administration issued its executive order," Marin told reporters Friday. Trump signed an executive order regarding detention of undocumented immigrants on January 25. Marin said generally it takes weeks of planning before an operation is carried out because the agency needs the time to develop case targets and leads.

Officials are trying to stress that these actions are consistent with regular enforcement.

"We do these operations two to three times a year," Marin said. "This is on par with past operations."

Immigration activists are concerned, however, that these raids may have targeted a wider scope of individuals than had been common in the Obama administration.

The official also questioned the Trump administration including in its general targets individuals with previous deportation orders. These are undocumented immigrants who went through court proceedings before and had a final order of removal, but had not been deported by the previous administration. The Los Angeles ICE office confirmed among its arrests five had no criminal histories but prior orders of removal.

"We ultimately decided those people were not a priority as there are literally millions of them and most have never committed any crime," the official said referring to violent crimes or felonies.

The official said that one appeal of targeting individuals with removal orders is that they can be deported "quickly," because no further court action would be necessary.

ICE in Los Angeles said it had conducted a five-day operation targeting criminals and fugitives, and said that the vast majority of those arrested had criminal histories.

Seeking to push back on reports of indiscriminate raids, ICE released the results of the operation from its Los Angeles office, saying about 160 foreign nationals were arrested during the week. Of those, 150 had criminal histories, and of the remaining arrests, five had final orders of removal or were previously deported. Ninety-five percent were male, they said.

A Homeland Security official told CNN on Saturday that 37 of those detained by Immigration and Customs Enforcement in California this week as part of the enforcement crackdown have now been deported to Mexico. The official said they had already been deported and had come back to the country illegally or had deportation orders against them. This group did not have to go through the adjudication process because they had already received deportation orders, the official said.

While specific numbers weren't available, ICE said "many" of the arrested individuals had prior felony convictions including violent charges like child sex crimes, weapons or assault charges.

An ICE official confirmed Atlanta had conducted a similar surge this week, and roughly 200 arrests were made in Georgia, North Carolina and South Carolina in a similar routine enforcement action. Texas Democratic Rep. Joaquin Castro said in a statement that he had confirmed with ICE's San Antonio field office that similar actions were conducted across Texas, calling the action "Operation Cross Check." He said he would be following up to make sure the actions were targeting the worst offenders.

Full numbers for the actions across the country will be made available Monday, the agency said.

Across the Midwest, ICE officials made more than 200 arrests in Illinois, Indiana, Wisconsin, Kentucky, Kansas and Missouri by day's end Friday, according to a statement released by the ICE Chicago office.

The ICE enforcement operation targeted "criminal aliens, illegal re-entrants, and immigration fugitives," the majority of those arrested "had criminal convictions," officials said. Some arrested during the Midwest sweep "will face criminal prosecutions by the U.S. Attorney's Office for illegal entry and illegal re-entry after deportation."

Still, as Trump continues to talk about cracking down on illegal immigration, advocates remain concerned that the new administration could be stepping up enforcement against otherwise peaceful undocumented immigrants.

On Thursday, protests sprang up at the deportation of Guadalupe Garcia de Rayos, a 35-year-old mother of two, who had checked in with ICE at an office in Phoenix the day before, as she had regularly since a 2008 conviction of using a fake Social Security number.

"These reports show the serious consequences of the president's executive order, which allows all undocumented immigrants to be categorized as criminals and requires increased enforcement in communities, rather than prioritizing dangerous criminals," California Sen. Dianne Feinstein said in a statement responding to media reports of the stepped up enforcement, including some accounts that the actions were targeting low-priority undocumented immigrants, including family men and women.

"The President wants to show off and it appears he has unleashed the Department of Homeland Security to kick-out large numbers of immigrants and anyone they encounter, without much oversight, review or due process," said Illinois Democratic Rep. Luis Gutierrez. "The goal of such policies is to inject fear into immigrant communities, frighten families and children, and drive immigrants farther underground. It damages public safety and the fabric of American communities while putting a burden on local social services and the foster-care system."

Gutierrez's concerns were echoed by Rep. Lucille Roybal-Allard, a Democrat from California.

"I am outraged to hear of the recent ICE arrests in southern California. If the Trump administration is genuinely concerned about threats to American security, it should prioritize violent felons and others who pose real danger," Roybal-Allard said in a statement. "My office has been working to get detailed information from ICE."

And a city councilman from Austin, Texas, said he was concerned that ICE was making a public show of force in his city as retribution for being a sanctuary city.

"ICE actions like these are beyond reprehensible," Greg Casar said in a statement. "They instill fear in the community, and they make everyday people fear for their lives."

Trump made cracking down on illegal immigration a central focus of his presidential campaign.

While ICE characterized the actions as routine, fear remains that the Trump administration's recent executive order beefing up interior enforcement of immigration laws could mean a vast expansion of deportations of undocumented immigrants.

While the Obama administration had clear guidance prioritizing deportation of high-level criminals, an executive order signed by Trump in his first week set up enforcement priorities that could include virtually any undocumented immigrant living in the US.

On Saturday, the President defend another part of his campaign promise on immigration, vowing to keep costs down on a border wall that would span the US southern border with Mexico.

"I am reading that the great border WALL will cost more than the government originally thought, but I have not gotten involved in the ... design or negotiations yet. When I do, just like with the F-35 FighterJet or the Air Force One Program, price will come WAY DOWN!" Trump wrote in two consecutive tweets.

A Department of Homeland Security spokeswoman said overall about the agency's actions that everything is "routine," and are not part of casting a widespread net.

"ICE Fugitive Operations teams are out every day as part of routine, targeted enforcement operations," said acting press secretary Gillian Christensen. "These are existing, established fugitive operations teams. ICE does not conduct sweeps or raids that target aliens indiscriminately. ICE only conducts targeted enforcement of criminal aliens and other individuals who are in violation of our nation's immigration laws."

DHS secretary John Kelly told reporters at San Ysidro Port of Entry between San Diego and Tijuana on Friday that his department isn't "rounding anyone up."

"The people that ICE apprehend are people who are illegal and then some," he said. "ICE is executing the law and I would tell you I've been around a lot of pretty darn good men and women in the armed forces and what I saw today, the professionalism that I personally observed in a very potentially dangerous environment gave me great pride."