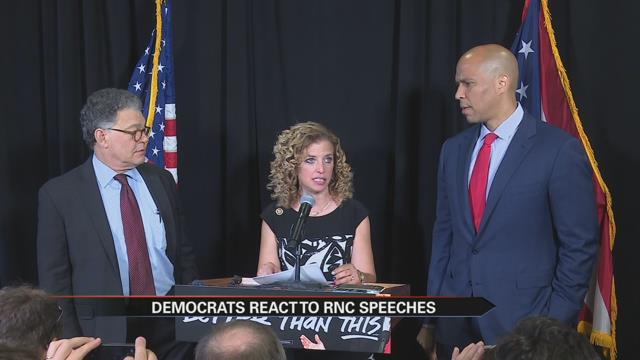 On the final day of the Republican National Convention, three top Democrats held a press conference condemning the conference. They had especially harsh words for Governor Mike Pence.

“Three days into this convention and only one thing about the Trump campaign is clear: he has no new ideas, no plans to offer, only bluster, fear, chaos and anger,” said Debbie Wasserman Schultz, Democratic National Committee Chair.

“This is the kind of negativity, ugliness that you have come to expect from Donald Trump,” said Senator Al Franken, D-Minn.

“I watch a convention that reminds of those rallies where Donald Trump incited people saying, ‘Hey, I’ll pay your legal bills if you take violent action!’ That’s not who we are as a country. That’s not the values and the principles that we stand for,” said Senator Cory Booker, D-New Jersey.

Pence was also criticized following his first national address as the VP pick.

“Governor Mike Pence tried to change the tone up a bit to give the audience something different, but we know the truth about Mike Pence’s record – I know I do, since I served with him in Congress – and it does not involve making either his state or country great,” said Wasserman Schultz.

Booker said the convention proves the Republican Party has no interest in discussing ideas, policy or facts.

We asked Booker if he thought Governor Pence fulfilled his role as a unifier during his address Wednesday night.

“He is a person that is on the far fringe of the Republican Party when it comes to his conservative beliefs. But ultimately, he keeps getting stepped on by Donald Trump both in his rollout, in his 60 Minutes interview, and now, in the mistakes that they’ve made in this convention; people, today, are not talking about that,” said Booker.

Booker is on Hillary Clinton’s short list to become her VP nominee.

He said he is happy to do whatever he can to support Clinton.