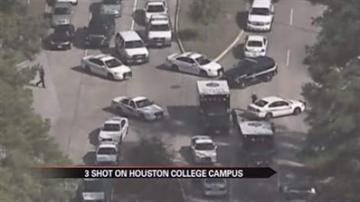 HOUSTON — Investigators looking into the shooting at a Texas community college said that campus police heard gunfire coming from an outside area between the library and an academic building.

Deputies confirmed students' accounts that said a fight started between two people before shots were fired.

A maintenance worker at the college was injured in the crossfire.

Both suspects were struck by gunfire and taken to the hospital where they were later arrested.

Classes were expected to resume Wednesday.