Deputies cleared in fatal shooting of man with knife

Two Berrien County deputies have been cleared in the fatal shooting of Chaz McGowen at a home in Niles Township on September 30.

Berrien County Prosecutor Steven Pierangeli released the details of the investigation and his office’s findings that the shooting was justified.

Around 10:30 p.m., deputies were dispatched to a residence in the 1900 block of S 13th Street for reports of a man who wouldn’t leave the residence and had a knife.

When deputies arrived, there were two people outside the home who explained Chaz McGowen was inside the home with two other people. They could hear yelling coming from inside the residence.

Deputies Preston Huddleston and Doug O’Dell asked McGowen to come outside of the home, but he refused and told the deputies to come inside, reports said.

When deputies entered the home, they ordered the other two people inside to leave for their safety, which they did. 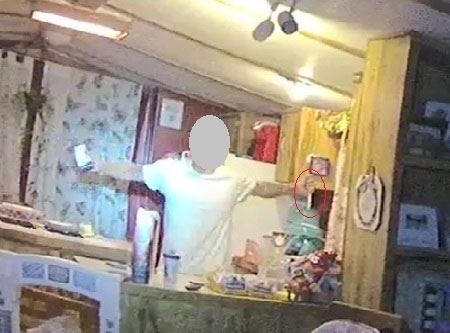 McGowen was standing in the kitchen area behind a half wall. Deputies asked him numerous times to show them his hands, reports said. (Photo from O'Dell's body cam shows McGowen with the knife highlighted with a red circle.)

Several minutes into the incident, McGowen picked up a knife, deputies said. Deputies repeatedly asked McGowen to put the knife down, which he eventually did.

They continued speaking to McGowen, who claimed the deputies were fake police officers, reports said.

During their conversation with McGowen, the deputies repeatedly told McGowen they wanted the situation to end peacefully, but McGowen said he would “[expletive deleted] you all up” and to “make your move” and picked the knife up a second time, according to the investigation reports.

McGowen said he was a “gangster” and had gone to jail for going “off the wall,” and put the knife down again, reports said.

McGowen picked up the knife a third time and began to move towards the deputies, reports said.

The deputies asked him to put the knife down and not to come any closer. McGowen allegedly said “Shoot it [expletive deleted} I’m ready to die.”

McGowen began knocking things off the kitchen counter at the deputies, then advanced towards them with the knife in his left hand, reports said. 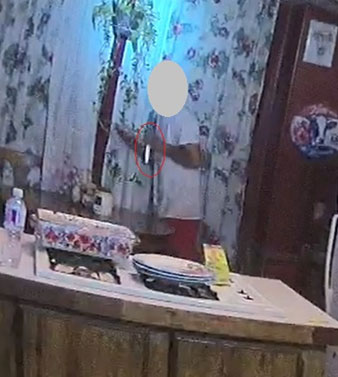 Second photo from O'Dell's body cam just before the second beanbag round was fired.

Deputy Huddleston deployed a round from the less lethal beanbag shotgun. The round struck McGowen in the abdomen.

McGowen moved to the back of the kitchen while still holding the knife, reports said. (Second image from O'Dell's body cam shows McGowen after he was struck with the first beanbag round, but before the second was shot)

When McGowen did not drop the knife despite repeated requests, Deputy Huddleston deployed a second round from the beanbag shotgun, which also struck him in the abdomen.

McGowen did not drop the knife, reports said.

The investigation revealed McGowen then began to scream at the deputies and charged at them with the knife in his hand.

Deputies attempted to back up from McGowen. 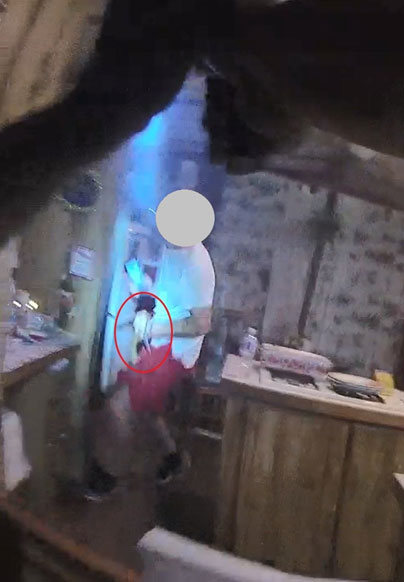 As McGowen advanced with the knife, Deputy Huddleston dropped the less-lethal shotgun and drew his service pistol.

Both Huddleston and O’Dell each fired four rounds at McGowen.

When McGowen fell to the floor, deputies began performing CPR.

McGowen died as a result of the shooting.

The investigative report from the prosecutor’s office says conducted a thorough investigation including review of the body-worn camera recordings of both deputies.

The report says the deputies instructed McGowen to show his hands at least 16 times and to drop the knife at least 37 times during the encounter.

The autopsy found the following injuries on McGowen:

The amount of methamphetamine was measured at 970ng/mL.

The investigative report mentions the autopsy report said, “blood levels of 200-600 ng/mL have been reported in methamphetamine abusers who exhibited violent and irrational behavior.”

During a review of the investigation and evidence, the prosecutor’s office found the use of lethal force was justified and reasonable to protect the lives of others.

No criminal charges will be filed.