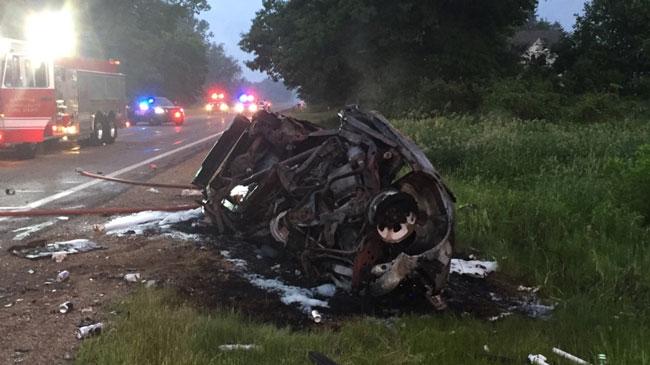 The Van Buren County Sheriff's Office has released the names of the two drivers who died when their vehicles collided, then caught fire on Sunday morning on M43.

The accident happened on M43 west of 46th street around 5:15 a.m. Sunday in Arlington Township.

When deputies, fire and EMS arrived, they found both vehicles on fire and the drivers trapped inside.

According to deputies, a Chevy S10 pickup was traveling westbound on M43 when it crossed the center line and struck a Pontiac Aztek traveling eastbound.
Both drivers died at the scene.

The driver of the pickup truck has been identified as 27-year-old Casey Aaron-Donald Snyder from Clare, Michigan.

The driver of the Pontiac Aztek has been identified as 20-year-old Quinten Greiner from Midland, Michigan.

Both drivers died as a result of injuries from the crash, according to the medical examiner.