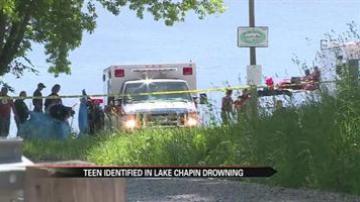 BERRIEN SPRINGS, Mich. -- The Berrien County Sheriff's Department released the name of the 17-year-old whose body was found in Lake Chapin Tuesday morning.

The teen was swimming in Lake Chapin Monday just after 6 p.m. when he had difficulty swimming and was unable to make it to shore.

Around 10:30 a.m. Tuesday, Albers' body was found and transported to the hospital.

Albers was in town visiting family for a long weekend.

"Approximately 300 yards from the Berrien Springs Dam, near one of the old train abutments," said Captain Paul Toliver of the Berrien County Sheriff's Department.

Police say Albers and his cousin were jumping off abutments, then swimming to shore.

Albers never made it back.

"We would like it very much if people didn't do that, however it's something that occurs in this community and unfortunately this type of thing can happen," said Toliver.

People who live in Berrien Springs say they grew up jumping off the blocks into Lake Chapin.

Michelle Masarira realizes now how risky that was.

"I simply could have went swimming yesterday and it could have been me. And to know that he's like around our age, it's really sad," said Masarira.