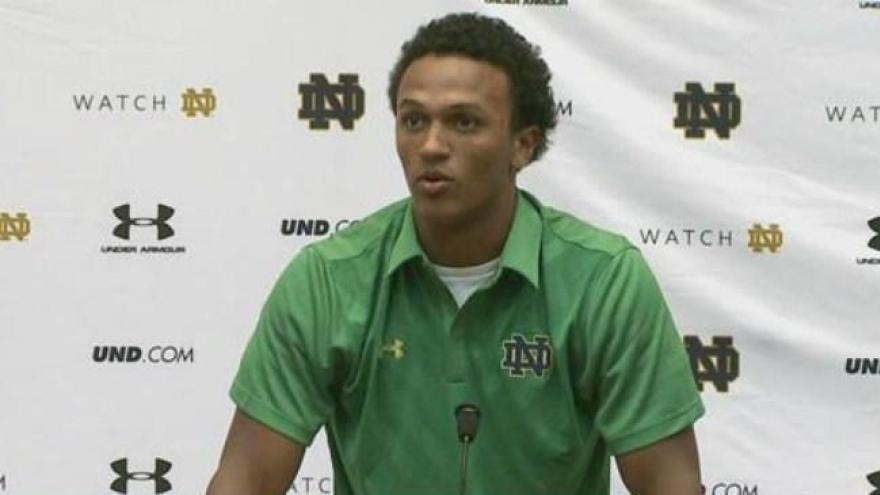 DeShone Kizer's time at Notre Dame is over.

The redshirt sophomore declared today for the NFL draft and will forgo his remaining two years of eligibility in South Bend. Kizer is regarded by many as one of the top quarterbacks in the 2017 NFL draft class. He was named 2017 team captain before receiving his evaluation from the NFL Draft Advisory Committee, which made his decision a lot clearer.

In a statement, Kizer thanked Notre Dame for his time.

"Three years ago, I made a decision to attend the University of Notre Dame," Kizer said in a statement he tweeted. "I found a second home and a second family. I made many connections on and off the field that changed my life in a positive manner. I'm truly grateful and blessed for everything that I've received," Kizer said. "I have an opportunity to continue my football career in the NFL. My family and I have taken the last couple weeks to collect all the necessary information to make a decision that will impact our future. After discussing with my family and the coaches, and weighing the pros and cons of remaining at Notre Dame, I believe it's time to change my path. I've decided to declare for the 2017 NFL draft. I'm ready to accept this challenge. I want to thank the University of Notre Dame, its fans, my teammates, my coaches and the entire football staff for standing beside me and believing in me throughout my career. I'm a better person today because of this support. I will forever be Irish at heart."

DeShone is an extremely gifted quarterback that was faced with a difficult decision,” Kelly said in a statement. “He could return as a senior captain at Notre Dame -- a place that he loves, and with a program that respects him immensely. Or, he could begin the next chapter in his life and accept the opportunity that likely awaits in the NFL," Kelly said. “While he chose the latter, the type of leadership DeShone displayed this past season will benefit our program moving forward. He’ll certainly be missed on and off the field, but we’re very happy for him and his family. DeShone will always represent this University with the utmost professionalism and class.”

In his Notre Dame career, Kizer passed for 5,809 yards and 47 touchdowns. He also rushed for 18 scores, and in 2015 set a ND single-season rushing touchdown record for quarterbacks with 10.

With Kizer's departure for the NFL and Malik Zaire transferring, the next signal caller for the Irish will be redshirt sophomore Brandon Wimbush.