Despite bad weather, "Race for the Cure" is a success 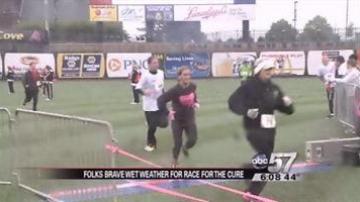 Not even cold, wet weather could keep people away from downtown South Bend Saturday for the annual race for the cure.

The annual event raises money and awareness for breast cancer. Right here in Northern Indiana, we have the highest death per capita for the disease in the state, making the "Race for the Cure" an important cause for folks in Michiana.

Organizers say one in ten women are affected by breast cancer in Michiana, and despite the rough weather, not even rain could dampen the spirits of those walking to raise awareness for a good cause.

More than 2,000 people crowded the streets of downtown South Bend, all linked by one cause.

"Cancer is so very import to all of us here" said Cary Baldwin.

From breast cancer survivors to friends and family, everyone running in today's Susan G. Komen "Race for the Cure" had a clear goal.

"It didn't affect us at all. We had a wonderful turnout. 1200 people pre-registered for the race which as the same as last year" said spokeswoman Pam Jerett.

Everyone had their own reasons to run. Just several days ago, DJ Hanbacks mentor who is a world-ranked triathlete was diagnosed with a tumor. Hanback says he's lacing up his running shoes today for him.

"He's the number two in world ranked triathlete and was here a year ago and ranked 10th overall, so we're celebrating Steve today" said DJ Hanback.

And whether running for a friend, family member or just anyone with cancer, these folks can expect 75% of the money raised to go back into their community. It is something so important, they refused to let the rain stop them.

This year's sponsors raised $85,000 which is up from the $75,000 that was raised last year. Right now runners have until the end of the month to fund raise. Organizers said they expect the runners to raise just as much money as sponsors if not more.