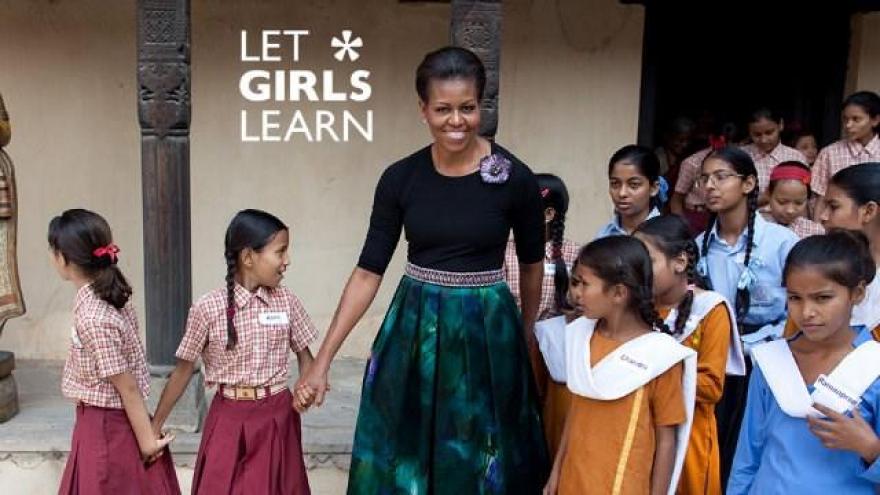 (CNN) -- Hours after CNN reported on an internal document advising administration employees that former first lady Michelle Obama's signature education initiative would not be maintained, the White House said the program had not changed.

"There have been no changes to the program," said Kelly Love, a White House spokeswoman, referring to the "Let Girls Learn" initiative, which Obama launched in 2015.

"Moving forward, we will not continue to use the 'Let Girls Learn' brand or maintain a stand-alone program," read an email sent to Peace Corps employees this week by the agency's acting director Sheila Crowley.

" 'Let Girls Learn' provided a platform to showcase the Peace Corps' strength in community development, shining a bright light on the work of our Volunteers all over the world," Crowley wrote. "We are so proud of what 'Let Girls Learn' accomplished and we have all of you to thank for this success."

The White House originally referred questions about the program to representatives for first lady Melania Trump, who declined to comment.

In their comment, the White House did not say whether "Let Girls Learn" would be maintained in the future as a standalone program -- and they also did not directly address the memo or why it had been sent.

In the agency memo, Crowley indicated that aspects of the initiative's programming focusing on girls education around the world would continue, a sentiment reinforced in a statement from a Peace Corps spokesman on Monday.

"The Peace Corps continues to prioritize girls' education and empowerment programming," the spokesman said. "Girls' education and empowerment has been a hallmark of our work over the past 56 years and we look forward to continuing those efforts with our interagency partners. We remain dedicated to the passionate work of our volunteers and staff to empower and educate girls in their communities."

A spokesperson for the United States Agency for International Development -- which, along with the Peace Corps, implements the "Let Girls Learn" program -- also said the organization would continue to support girls educational programs.

"The administration supports policies and programs to empower adolescent girls, including efforts to educate them through the completion of secondary school," said the USAID spokesperson. "We are committed to empowering women and girls around the world and are continuing to examine the best ways to do so."

The USAID spokesperson declined to comment on whether the agency would continue to use the "Let Girls Learn" branding or operate the program as a standalone entity.