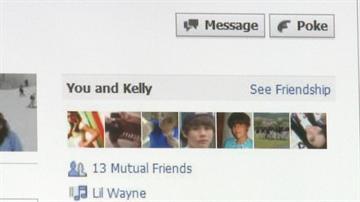 SOUTH BEND, Ind. – One detective with the St. Joseph County Police Department spends a lot of at work on Facebook.

The officer is undercover online, creating fake profiles and posing as young children to bait and catch predators.

It’s all part of the St. Joseph County Police Department’s Cyber Crime Unit. Sheriff Michael Grzegorek launched the division back in March, “We thought that the most serious crimes we that against children and that’s what we wanted to concentrate on.”

Crimes like child pornography and extortion have run rampant all across the country. Legal advisor for the CCU, Eric Tamashasky pulled up a map on his computer screen, the red dots represent the people who have shared child pornography online within the last hour, “You almost lose sight of the populated parts of American,” Tamashasky said.

The thousands of dots are all people distributing the illegal material and all are known to law enforcement.

“The vast majority of these cases, because of staffing and manpower are not being investigated,” Tamashasky said. “We have the tools we have the ability to start finding these people and tracking them down, we simply need officers to go find them.”

The St. Joseph County CCU has made that commitment to track down these predators, “We have several investigations underway and we’ve made a couple arrest this year, it’s going very, very well,” Grzegorek said.

Whether the victim or the predator is in St. Joseph County, the CCU and its detectives investigate.

38-year-old Strell of South Bend posed as a 17-year-old boy online; under this assumed identity he asked a young girl he met in a chat room to text him nude photos.

“A chat room is dangerous, but with everything on the internet most people aren’t what they seem.” Tamashasky said, “Kids get involved with people online who they thing are one thing and turn out to be another.”

Pedophiles often use fake screen names or profiles to meet minors on the web, if and when pornographic photos are sent, the predator uses those pictures as blackmail. This is what police refer to as ‘sextortion.’

“At that point it’s basically made to order, they either start trying to trade sex or pictures with the threat or I’m going to post this on Facebook,” Tamashasky said.

Strell allegedly demanded more photos from the young girl he met online; if she refused to text him the photos, he said he would post the photos to the web.

Others can be more aggressive, Tamashasky said some predators will track the kids down and demand sex, “The dangers of this can’t even be measured,” he said.

But kids just don’t know what they’re getting themselves into, Tamashasky said the production and distribution of child pornography is what kids call sexting.