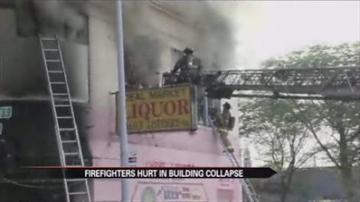 DETROIT -- A Detroit building collapsed during a fire and two firefighters were injured. The incident was caught on video.

From the video you can see the roof start to fall apart, sending bricks onto the firefighters below.

Firefighters were able to pull one person to safety but it left those watching the scene unfold shaken.

"It was really horrible to watch this happen, so everybody freaks out," said a witness. "Every single one of those bricks that had gone fell on him."

The two firefighters were taken to the hospital for neck and back injuries. One has a concussion and a broken ankle.

Everyone inside the building was able to get out.

An arson team is expected to investigate.