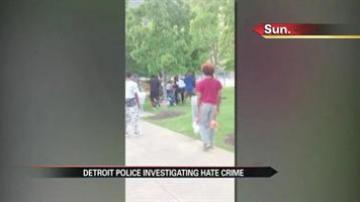 The beating of a 20-year-old gay man during a pride festival in Detroit was caught on camera.

Christin Howard was attacked by a group of men on the river walk.

Howard said he was taking a picture with a friend when things turned violent.

The Detroit Police Department is investigating the attack as a hate crime.
Share this article: