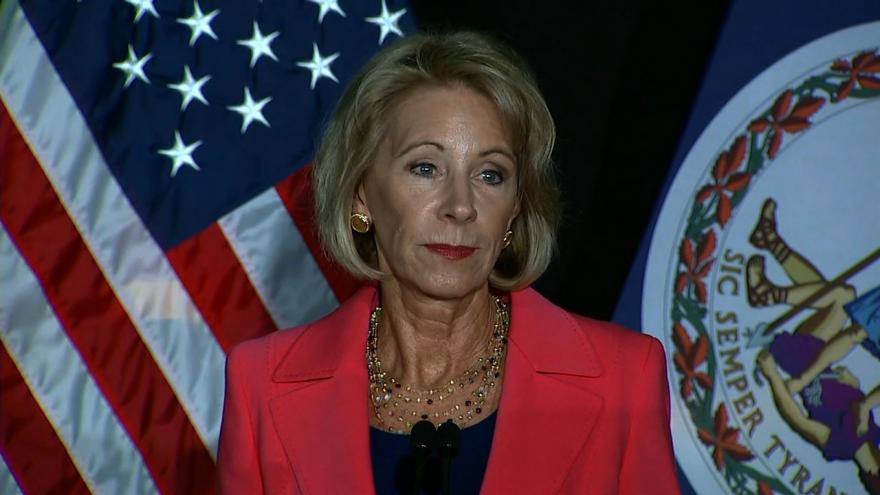 DeVos thanked her predecessors for bringing the issue of campus sexual assault to light but said "good intentions alone are not enough."

Title IX is a federal law that prohibits discrimination based on sex for schools and programs that receive federal funding. This includes protection from sexual harassment.

DeVos was asked in an interview with CBS News' Jan Crawford if Thursday's announcement meant she was "rescinding the Obama administration guidelines."

"Well, that's the intention, and we've begun the process to do so," DeVos said to Crawford. "As I've said earlier, in all of this discussion, it really is a process not an event."

In 2011, the Obama administration outlined guidelines for schools on how to handle sexual assault allegations in a memo referred to as a "dear colleague" letter.

The letter reminded schools of their legal obligation to address sexual violence amid concerns that schools were not taking the issue seriously enough, and called on schools to step up investigations of reports. It also provided guidelines for investigations and hearings.

Critics have said the guidance is unfair toward the accused and could jeopardize their futures, as the guidance lowered the standard for proving allegations.

This criticism is what DeVos echoed in her speech Thursday, when she shared stories of both survivors and "victims of a lack of due process."

"The truth is that the system established by the prior administration has failed too many students. Survivors, victims of a lack of due process and campus administrators have all told me that the current approach does a disservice to everyone involved," DeVos said.

However, DeVos did not make clear how the Education Department will change the policy.

"In order to ensure that America's schools employ clear, equitable, just and fair procedures that inspire trust and confidence, we will launch a transparent notice-and-comment process to incorporate the insights of all parties in developing a better way," DeVos said. "We will seek public feedback and combine institutional knowledge, professional expertise and the experiences of students to replace the current approach with a workable, effective and fair system."

Online critics included former Vice President Joe Biden, who had championed curbing sexual assault on campus as one of his missions while in office with the initiative "It's On Us."

"Today's announcement that the Department of Education plans to rewrite key Title IX guidance which works to address and prevent sexual assault in our schools is a step in the wrong direction," Biden said on Facebook. "The truth is, although people don't want to talk about the brutal reality of sexual assault, especially when it occurs in our most cherished institutions, it is our reality, and it must be faced head-on. And any change that weakens Title IX protections will be devastating."

Sen. Kirsten Gillibrand, D-New York, also criticized the announcement: "This betrays students. @BetsyDeVosED should be doing everything she can to make Title IX enforcement stronger," a tweet from Gillibrand read.

The group "End Rape on Campus," which has helped students file Title IX complaints, called the move "an attack on survivors of sexual violence and the right to an education free from violence."

"This announcement simultaneously demonstrates a gross negligence for the students Secretary DeVos has been asked to serve, and a failure to understand the grounds on which their protections stand," Annie E. Clark, executive director of End Rape on Campus, said in the statement. "We will not accept this blatant favoritism for the rights of rapists under the guise of fairness."

In contrast, freedom of speech advocacy group Foundation for Individual Rights in Education, or FIRE, applauded the move and said that DeVos' announcement "acknowledged that the department's approach to enforcing Title IX, the law against sex discrimination in federally funded education programs, is fundamentally broken."

"Addressing widespread concerns about the fairness of current college sexual misconduct codes, the secretary noted that respect for due process is 'the foundation of any system of justice that seeks a fair outcome,' and that codes must ensure 'fair procedures that inspire trust and confidence,'" the group said in a statement. "With regard to the unilateral and opaque way that current federal mandates in this area were imposed, she further assured listeners that 'the era of "rule by letter" is over.'"

It has been widely speculated that Title IX policies would see changes under the Trump administration. During her confirmation hearing, DeVos would not say if she would uphold the Obama-era guidance.

In July, Candice Jackson, the head of the department's civil right's office, came under fire for saying investigation processes have not been "fairly balanced between the accusing victim and the accused student."

"Rather, the accusations -- 90% of them -- fall into the category of 'we were both drunk,' 'we broke up, and six months later I found myself under a Title IX investigation because she just decided that our last sleeping together was not quite right,'" according to The New York Times.

In February, the Department of Education rolled back Obama-era guidelines that gave protections to transgender students in public schools who used and facilities that corresponded with their gender identity.

CORRECTION: This story has been updated to correctly state that the Obama-era "dear colleague" letter did: It provided guidelines for investigations and hearings, it didn't mandate the creation of Title IX panels.