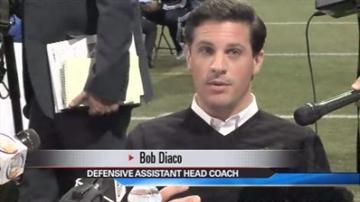 Diaco's name has been the subject of a few open head coaching positions.

But the defensive coach said he is happy at Notre Dame and does not want to leave.

As for Diaco's success in coaching Manti Te'o, the coach was a former linebacker himself.

And he also knew Coach Kelly before coming to Notre Dame.

Diaco coached linebackers for Kelly at Central Michigan in 2005.