Did a coal fire sink the Titanic? 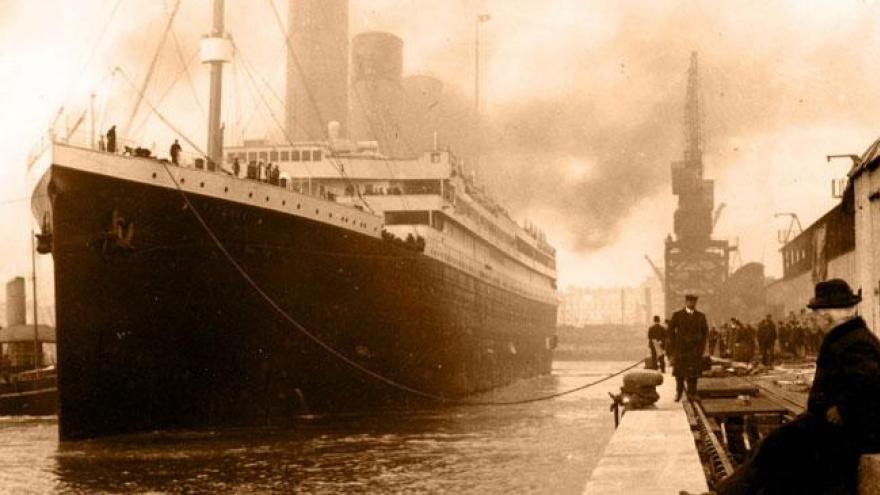 (CNN) -- Did an intense fire on board R.M.S. Titanic lead to one of the worst disaster's in maritime history?

A new documentary by author and journalist Senan Molony suggests the emergence of pictures hidden in a forgotten album for a century prove that the supposedly unsinkable passenger ship was weakened by a smoldering coal fire even before it left on its catastrophic maiden voyage.

Titanic, which at the time of its sinking in 1912 was the biggest ship afloat, hit an iceberg in the north Atlantic on the night of April 14 and went down with the loss of about 1,500 lives. Some 700 people survived.

Molony said the existence of a fire inside one of the coal bunkers is well documented -- but its significance underplayed.

In the documentary Titanic: The New Evidence, broadcast on the UK's Channel 4 on New Year's Day, Molony reveals pictures taken in early April 1912 shortly before Titanic started its trans-Atlantic voyage. They show a mark on the White Star ocean liner's starboard side near the seat of the fire, and the point of the collision.

"The anomaly is exactly the place where it struck the iceberg," he told CNN.

Molony said his research suggests the intense fire in one of the coal bunkers, which were three storeys high, reached temperatures of around 1,000 degrees, warped the bulkhead steel and made it brittle.

"The bulkhead was not worthy of the name. It completely compromised the ship and led to an accelerated sinking -- Titanic couldn't stay afloat long enough for an effective rescue," he said.

Molony said the pictures were taken at the Harland and Wolff shipyard in Belfast, Northern Ireland, by John Westbreech Kempster on the first two days of April 1912 -- just over a week before it sailed, bound for New York City.

In the documentary he describes the pictures as "the Titanic equivalent of Tutankhamun's tomb."

He told CNN that they were contained in an album which had been put up for sale at an auction in England at the time of the centenary in 2012.

Why did Titanic speed up?

The pictures immediately stirred his interest. The journalist who is political editor of the Irish Daily Mail had been interested in the Titanic story since he was a child.

After the discovery of the ship on the ocean floor in 1985 he researched and wrote a book about the Irish passengers on board.

"I'm really excited about some new evidence," he told CNN. "I've always been fascinated by why it [the Titanic] sped up towards an ice field."

He said his investigations suggest that workers in the boiler room may have been trying to clear the burning coal bunker -- and that the only place to put the coal was in the ship's furnaces, which would have made Titanic steam on at a higher speed.

Not everyone is convinced of the argument.

David Hill, former secretary of the British Titanic Society, told The Times newspaper: "There certainly was a fire. Was it a life-changer? It's my personal opinion that it didn't make a difference."

In a statement sent to CNN, the convention officer for the British Titanic Society Nikki Allen, said the documentary had "ignited discussion around the world."

"The program and its contents is certainly welcome," she said.

"It will enable us to encourage healthy discussion among our membership so that they can decide for themselves on information placed before them so as to inform their own opinion.

"Most satisfying to us, as I'm sure to other like-minded societies is the reaction to Senan Molony's presentation. It clearly shows that although the Titanic sank with great loss of life almost 105 years ago, the story of the vessel and her passengers and crew is still very much alive, for which we are grateful."