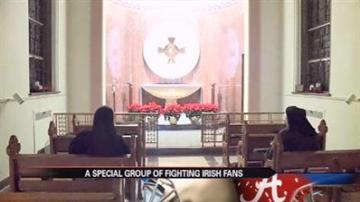 MISHAWAKA, Ind.-- Just ask these ladies who God is rooting for- they have him on speed dial.

"God doesn't care whether or not Notre Dame wins, but his mother does," said Sister Barbara Anne.

These die-hard fans swap out their rosaries for some game-day pizza. If prayer time overlaps game time, they pray extra fast.

"Most of us watch it together at about two or three different spots in the building," said Sister Agnes Marie. "We have one spot for those that are extremely loud and then we have another location where the group is more restrained."

Sister Ann Bernadette is one of the rowdy nuns, but said that's what you get growing up with all brothers.

"If they're close to the goal line I just say, 'Go, go, go, you can do it!' and if the other team has the ball, I say, 'Hold them back, don't let them go, don't let them move forward,'" said Sister Bernadette.

When tensions get high, so do the nuns' blood pressures.

But not everyone in the convent is Irish. A few are committing a South Bend sin: rooting for Alabama.

Thankfully, forgiveness is in a nun's job description. As is friendly betting, they've already put down their best guess for the final score. Luckily, they say they have a higher power on their side.

"We do this on every game, not just this game," said Sister Barbara Anne. "And even though Notre Dame is picked to lose, I can never vote against them."