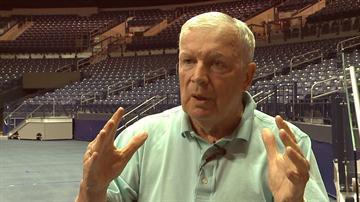 SOUTH BEND, Ind. – Former Notre Dame Basketball Coach Digger Phelps gave his own take on Monday’s meeting of the South Bend Common Council where he ended up in a shouting match with council members over his campaign to curb youth violence.

"We're trying to get rid of the violence to make these neighborhoods safe and that's all of us working together to help each other and that's just my message it's not about me,” Phelps explained.  “I may be the coach and I may scream and yell once in a while, that's what coaches do."

Council members have complained that Phelps has been disruptive during health and public safety committee meetings.  At Monday’s meeting some council members said they felt Phelps had been ordering them to take part in helping to create neighborhood watch groups, something Phelps described as critical to fighting the violence problem and enhance community policing.

Phelps has also received criticism for his focus on mentor programs; he has called for 500 people in the community to volunteer to be mentors for at risk youth and said similar programs already in place have helped thousands of at risk youth.  Many, including Second District Councilman Henry Davis, have said mentor programs have been tried in the past and don’t go far enough to combat the issue of violence.  Phelps said mentor programs are a crucial starting point in taking on the problem even if mentors spend only one hour a week with a child.

"That youngster with the mentor will sit there and four other youngsters will come over and listen, that's the outreach, that's the impact that these young kids want to hear,” Phelps described.  “At the same time they want you to listen to hear about their life and what they're doing so that we can put them in the right direction."

Phelps said he will continue to push to get neighborhood watches and community policing programs in place by June 6, with or without the help of city leaders.