Director of Humane Society speaks out 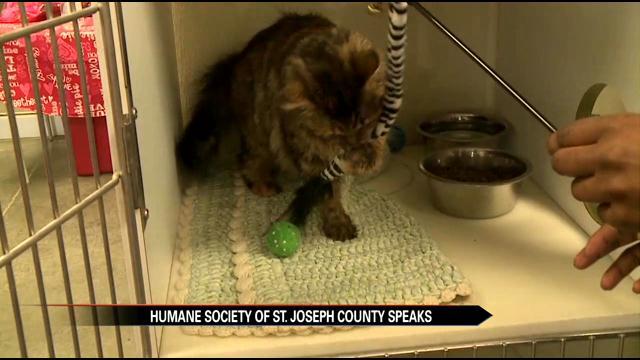 A group of taxpayers believe the euthanasia rates at the Humane Society of St. Joseph County are too high. On Thursday the Executive Director broke her silence and responded to the criticism.

Dr. Carol Ecker said they don't turn animals away at the shelter when citizens drop them off at their door because they are also an animal control facility.

In 2013 Ecker said they only sent 20 animals to pet rescues but according to their records that number improved in 2014.

Ecker said, “We did 148 rescues this year and that doesn't include horses. We took in probably 20 something horses that were starved to death! People don't even know what we do here.”

During the County Commissioners meeting last week, Ruth Szyarto voiced her concerns and asked the county to stop doing business with the humane society if problems persist.

Szyarto said, “The St. Joseph County Humane Society placed a meager 28 animals with rescues while killing 683 they deemed not good candidates for adoption.”

Dr. Ecker said her critics don't have the correct numbers and she said in the past she asked them to help the shelter find more rescues.

Ecker said, “We were asking for cat rescues but we never got one from them! Have five litters of puppies here that need fosters and one person stepped up, if you're going to criticize somebody, at least come through and offer support or help.”

Ecker said, “Not many people are going to adopt an animal that has feline leukemia or FIV in the real world people can have those animals and take care of them but when you have massive animals like we do and have to herd medicine, those are the animals that have to go down.”

Ecker also responded to my report from December regarding their practice of dumping deceased animals in the Berrien County Landfill.

Ecker said, “That's a very common thing to be used. We can't afford anything else. I can't bury them in the yard and I can't get permission to have a crematorium here on the property, that's all I have.”

Ecker claims the City of Mishawaka will not allow the shelter to have an on-site crematorium, and to cremate the animals at Palmer Funeral Home is costly.

Ecker said, "I can't pay $3,000 to $5,000 a month to have animals cremated. I didn't see one check from anybody that would stop that situation. We take them to the landfill because it's $17.00 dollars (per trip) that's a big difference. I can't afford that. I'd rather spend my money on living animals that I can help!”
If you would like to read the documents provided by the Humane Society of St. Joseph County, click here to view them.