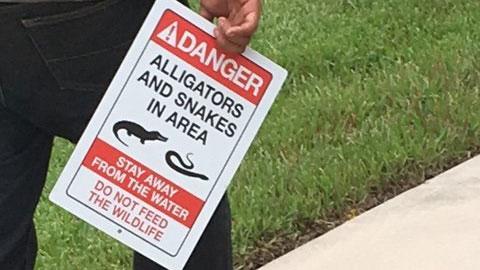 (CNN) -- Three days after an alligator dragged a 2-year-old boy to his death in a lagoon at a Walt Disney World resort, the company's facilities are installing warning signs and temporary barriers at their beaches.

The signs being installed contain four sets of messages: "Danger," "Alligators and snakes in area," "Stay away from the water," and "Do not feed the wildlife."

Presently, there are "No Swimming" signs dotted around at the lagoon, but there are no warning signs about alligators.

The company's actions follow the death of Lane Graves, who waded into a lagoon near Disney's Grand Floridian Resort & Spa southwest of Orlando Tuesday.

As the toddler stood in about a foot of water, an alligator grabbed him, and dragged him underwater.

His horrified parents -- along with bystanders -- dove after the toddler, according to witnesses.

But it was too late.

A dive team found the toddler's body on Wednesday, intact, in 6 feet of murky water about 10 to 15 yards from where he was snatched.

In Florida, a state with an estimated 1.3 million alligators, sightings are common, but attacks are rare.

In 2015 there were nine major unprovoked attacks in Florida, with one fatality.

Disney personnel searched for alligators on the resort's grounds in the days since Lane's death. So far, search teams have captured and euthanized at least five alligators caught as searchers scoured the water for the boy, officials said.

The alligator responsible for the child's death might be among those euthanized, but authorities said they can't be sure.

"We have a large property, and from time to time, we have to remove alligators from our property," Wahler said, "nearly one-third of Walt Disney World property is set aside as a conservation area and these areas attract a variety of native wildlife."

While announcing the new signage and barriers, Wahler also said the company will be encouraging its staff and guests to stay vigilant.

"We are reinforcing training with our (staff) for reporting sightings and interactions with wildlife and are expanding our communication to Guests on this topic," he said.