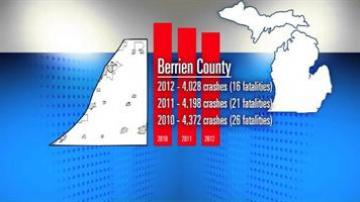 NILES, Mich. -- According to state figures car crashes claimed the lives of 28 people in Cass and Berrien counties last year. Of those 28 deaths only one was filed under 'distracted driving' so we wanted to know how accurate is that data?

Rob Herbstreith of the Michigan State Police is aiming to make the roadways safer.

According to state police, the number of traffic crashes in southwest Michigan is decreasing, but more of those are resulting in injury and death.

Many of those police say are because too many drivers are not paying attention.

We looked at traffic data and found that incidents of distracted driving may be under reported.

Last year, Berrien and Cass counties logged only one distracted driving death out of 28.

"We don't see everybody who's talking on the phone. A lot of times, they've crashed - maybe they've had time to put the phone away - and we don't know," said Herbstreith.

For drivers and police, it's a concern. How can you fix a problem if you're not sure exactly how big it is?

Herbstreith believes that drivers, especially the younger ones, are beginning to get it.

"I think the attitudes are shifting. These young people are realizing they could die," said Herbstreith.

Through outreach programs and tougher state laws, police are hoping to see a big change not just in attitudes - but in numbers as well.