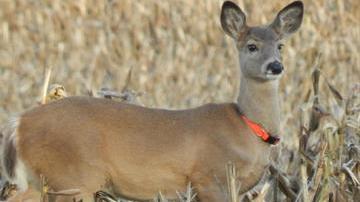 LAKEVILLE, Ind. -- A local Lakeville family has been paying close attention to the case of a Cornersville, Indiana couple who the DNR said was illegally taking care of a deer.

The Department of Natural Resources asked that charges be dismissed against the couple after Gov. Mike Pence asked the DNR to re-examine the case earlier this month.

Ron Kaszas, his wife Sara and their two kids found a fawn on the side of the road whose mother was hit by a car and died. They raised the wild animal for the last 9 months.

On Wednesday an officer with the DNR paid the Lakeville family a visit.

The DNR officer wanted to make sure the deer wasn't confined in a cage or fenced in area. After 10 to 15 minutes he left without taking action against the family.

The family has named the deer Daisy. 12-year-old Hunter Kaszas said, "She's pretty much like a dog!"

Ron Kaszas said, "She'll come up and lick your hands and she doesn't bite, she just eats grass."

"She'd be about 9 months old right now and she just doesn't want to leave. She stays here and runs back in the woods and comes back. We brought her home and started her on a little regime of goats milk and introduced greens to her after a while and let her out," said Ron.

Ron said their daughter Hannah decided on the name Daisy and they consider her part of the family.

Daisy even walks the kids to the bus in the morning.

Ron said, "She usually comes out to the deck and follows them out to the drive and she'll stand out there until the bus leaves usually."

Daisy usually makes her way back out to the road waiting for the kids to get home from school around 4 p.m. as well.

Hunter said the students on their bus thought Daisy was a dog at first, but now they know.

"People always were driving by stopping to see her."

Ron said on occasion Daisy will follow them into their home.

Hunter said, "She goes in the bedroom, she goes downstairs every once in a while."

But with the recent attention surrounding a downstate couple that were being charged with illegally raising a deer, Ron says although they paid close attention to the case, it doesn't worry him or his family.

"She has been free and since there's no deers around, she just stays here and I'm glad they finally made the decision to drop the charges on them."

He said their biggest concern now that hunting season is over is the traffic that travels on the road they live on.

"All the deer got pushed out because of this new bypass out here that they are building. The only thing that bothers us now is her crossing the road once and a while. "

During the hunting season Ron put a bright orange collar on Daisy so hunters would not shoot her. He also informed neighbors who live near him so they could spread the word as well.

They know one day Daisy might venture off and Ron said they are prepared if that day ever comes.

"She's a wild animal and if she does take off so be it- at least she has a decent life and has a chance," he said.