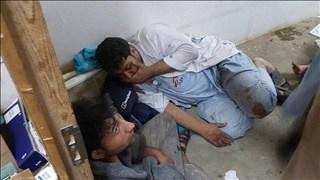 Afghan forces backed by U.S. airstrikes fight to force out Taliban insurgents who have occupied the city of Kunduz.

The latest strike hit a hospital, killing aid workers and patients and leaving a path of destruction.

According to U.S. officials, Afghan forces called in the airstrikes, not Americans, which is different from initial reports indicating U.S. forces were threatened and the airstrike was called on their behalf.

“Afghan forces advised that they were taking fire from enemy positions and asked for air support from U.S. Forces,” said General John Campbell.  “An airstrike was then called to eliminate the Taliban threat and several civilians were accidentally struck.”

Vickie Hawkins, executive director of MSF UK, says a hospital is not the kind of target they would take out.

“The International Coalition Forces and the Afghan military knew exactly where we were, so I don’t understand how any kind of confusion could have occurred,” said Hawkins.

Afghan officials accused Taliban militants of firing from the hospital, which Doctors without Borders denies.

Secretary of Defense Ash Carter called the situation “confused and complicated,” adding U.S. officials are still trying to find out exactly what happened.

The Pentagon has promised an investigation, and Afghans have ordered the same.

The Doctors without Borders staff say they will leave Kunduz.