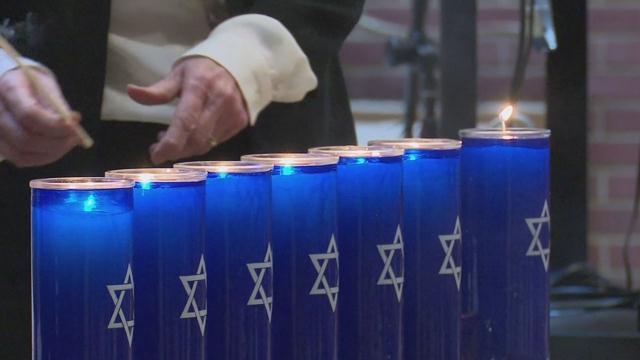 The South Bend Community is commemorating the 78th anniversary of Kristallnacht, by showing a documentary at a local synagogue, to promote tolerance and inclusivity. Kristallnacht is a night that Nazis in Europe led a massive demonstration against Jews.

Temple Beth-El in South Bend, invited the public to view a documentary there, about how hatred can still be found within the states. The movie, called "Surviving Skokie,"  about a Neo-Nazi demonstration that almost happened in the suburbs of Chicago.

To the attendants on Sunday, it wasn't just a reminder of the Holocaust. It was about preventing something similar, from every happening again.

For filmmaker Eli Adler, "Surviving Skokie," is a telling of the past.

After Neo-Nazis threatened to march through the Chicago suburb with the highest population of survivors in the country at the time, residents knew something needed to change.

"They decided they needed to act together and speak up, and speak out against bigotry and racism," Adler says.

In his film, Adler revisits the events in Skokie, while following his father's story of surviving the Holocaust.  The viewing in South Bend, brought the Michiana community together.

Sid Shroyer is the Director of Education at Temple Beth-El. He says it's important to learn from the past.

"[There's] a principle in Judaism called Tikkun Olam, which means 'repair the world,'" he says. "I really think that starts with education and having the consciousness of these kinds of events.

He believes there's a responsibility for people not to forget the lessons of the Holocaust, regardless of race or religion.

Nan Tulchinsky is Catholic. She, and many others of different backgrounds, attended the event.

"The idea that things like this are still happening today," she says. "It's really important that we realize that atrocities happen all the time. It's not just one thing that happened a long time ago."

"Everyone should try to inform themselves better, be lifetime learners," adds Tulchinksy. "Things like this happened,and they continue to happen, and we have to fight to make sure they don't."

And it's a lesson he believes, everyone should learn.