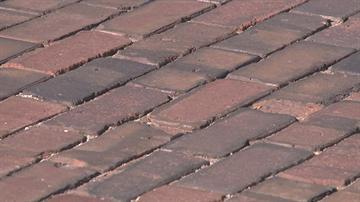 SOUTH BEND, Ind. – Underneath the asphalt on some of the streets of South Bend’s East Bank Village are bricks that used to line the roads and one local business owner is lobbying for the city to restore the old brick streets.

"With brick streets you get the sense that there's a community, that everybody cares, they went the extra mile for a really nice aesthetic,” described Kathy Reddy White, owner of the Circa Arts Gallery on Colfax Street.  “If you had all brick streets in this area you would know that you were in a very special place and create a sense of place.”

According to Reddy White, the city will be tearing up the streets for sewer work in the coming weeks.  She thinks that will be the perfect opportunity to remove the asphalt and restore the old brick streets.  She claims that the brick will not only add character to the area, but would also be more cost effective.

“They say it (asphalt) is cheaper, but it really isn’t in the long run,” she explained.  “If we could get back to brick we wouldn’t have to resurface the streets for another hundred years.”

Restoring the streets, she said, would also add to the new townhouse developments in the area which are designed to look like older factory and warehouse buildings on the east bank.

“I think we should try to celebrate what we do have and really enhance it with the brick streets and the brick buildings,” she described.  “There’s a lot that you don’t really realize is here.”

She pointed to examples of cities across the country that have restored old brick streets, which in turn created arts districts along the streets.  Reddy White’s plan is for the East Bank to become an arts district that will be a haven for college students and young professionals that are key to restoring South Bend’s economy.

“If we could use the brick streets as a catalyst to development and actually get some buildings down here to put stores in and create maybe a college town or just a fun destination,” she explained.  “We may be able to keep people here.”

Reddy White hasn’t made a formal proposal but is circulating the idea around the city to stir debate and to inspire others to come up with their own ideas to help turn the city around.

More information can be found on the Facebook page for the brick street campaign.