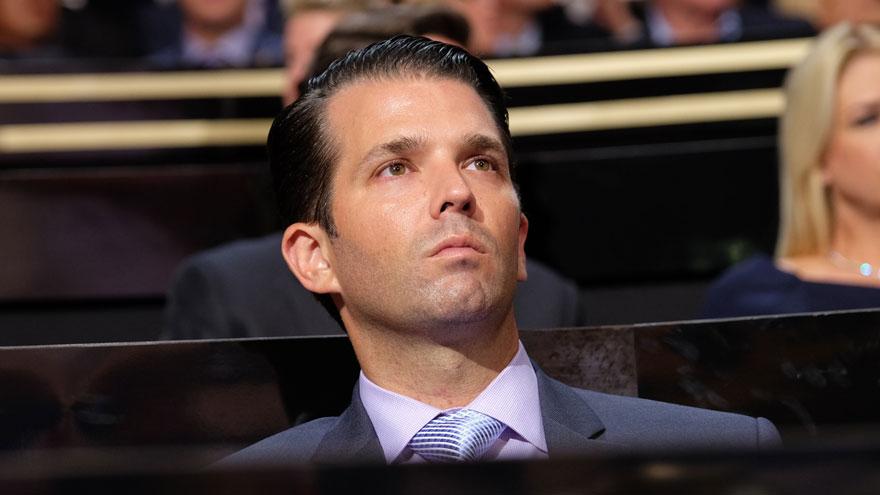 WASHINGTON (CNN) -- President Donald Trump's eldest son, Donald Trump Jr., agreed to meet with someone he believed to be a "Russian government attorney" last summer after receiving an email offering him "very high level and sensitive information" that would "incriminate" Democratic presidential nominee Hillary Clinton, according to emails the younger Trump publicly released on Tuesday.

The email, from publicist Rob Goldstone, claimed the information was part of "Russia and its government's support for Mr. Trump."

Goldstone subsequently offered to set up a meeting with a "Russian government attorney" to discuss the information.

Goldstone, who represents the son of an Azerbaijani-Russian businessman close to the Russian government, claimed in an email to Trump Jr. in June 2016 that a top Russian prosecutor had offered the father "some official documents and information that would incriminate Hillary and her dealings with Russia."

"This is obviously very high level and sensitive information but is part of Russia and its government's support for Mr. Trump," Goldstone wrote in the email to Trump Jr.

"If it's what you say I love it," Trump Jr. replied, according to the email he released.

The Russian attorney, Natalia Veselnitskaya, denied in an interview with NBC News having ever acted on behalf of the Russian government.

And despite Goldstone's promises, both Veselnitskaya and Trump Jr. say the lawyer offered no consequential information on Clinton.

The emails offered the most concrete evidence yet that Trump campaign associates and family members were willing to receive support from the Russian government during the 2016 presidential campaign. Federal investigators have been probing ties between Trump campaign associates and Russia for months as part of an investigation into Russian interference in the 2016 campaign.

The US intelligence community concluded that Russian President Vladimir Putin directed an influence campaign to hurt Clinton and help Trump during the 2016 presidential campaign, though it was not clear whether the emails Trump Jr. received were part of that effort.

President Donald Trump and the White House have repeatedly refuted allegations of Russian collusion, with the President calling the investigations a "witch hunt."

Trump Jr. tweeted out the emails after The New York Times first reported on the meeting between Trump Jr. and a Russian lawyer on Saturday. The Times subsequently reported that Trump Jr. had been told that the information he was promised on Clinton was part of Russian government efforts to help his father's campaign.

Trump Jr. tweeted that he was releasing the emails to be "totally transparent," but his release came moments before The New York Times published the content of the emails.

Goldstone, in his initial email to Trump Jr. on June 3, 2016, also offered to "send the info to your father via Rhona," appearing to refer to Trump's longtime assistant, Rhona Graff.

Trump Jr. has changed his story several times since the Times first reported on the rendezvous with the Russian attorney. At first, he offered no indication that the meeting was in any way tied to an offer of damaging information against Clinton until The Times uncovered additional motives behind Trump Jr.'s decision to accept the meeting.

Trump Jr.'s attorney has dismissed the revelations as "much ado about nothing" and Trump Jr. said in a statement Tuesday morning that he thought the information being offered was "Political Opposition Research."

"I first wanted to just have a phone call but when that didn't work out, they said the woman would be in New York and asked if I would meet. I decided to take the meeting. The woman, as she has said publicly, was not a government official," Trump Jr. said in a statement he tweeted along with the emails. "And, as we have said, she had no information to provide and wanted to talk about adoption policy and the Magnitsky Act."

Veselnitskaya has also claimed the meeting primarily centered on the Magnitsky Act, a bill signed into law in 2012 by President Barack Obama that leveled sanctions on Russian individuals. Putin retaliated against the sanctions by banning the adoption of Russian children by American citizens.