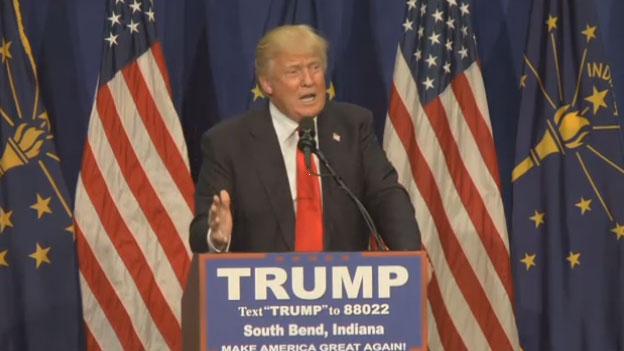 The Donald Trump rally began at about 7:45 p.m. at the Century Center in South Bend.

Thousands of people were inside the Century Center to see the Republican candidate speak.

Former Purdue basketball Coach Gene Keady and Coach Digger Phelps took to the podium and spoke in support of Trump, then Trump took the stage.

Trump says he is not really a politician and that he has the lowest tax plan of any of the candidates.

He added he wants to repeal Obamacare because it's a disaster.

Trump says a year ago, Bobby Knight called him and encouraged him to run for president. He said Knight said, "You gotta run!"

Indiana is "Importantville" according to Trump.

We spoke with Trump supporters before the event and asked what they wanted to hear.

"I’m looking to hear just continue to say the things that a lot of people almost feel afraid to say. He really has no filter and he’s not afraid to step on any toes. He’s not in this really for anything other than just to get issues out there he really feels are important. And you can love them, hate them, have no opinion on them whatsoever, but a lot of them, I do feel are important and nobody else but him is, or at least was talking about it when he first brought them up, and that’s refreshing to me," said Brad Monk, a Donald Trump supporter.

"I’d like to hear a lot of the same. He speaks the truth! I believe he can do what he says. I trust him and I think he’s going to bring this country back to where it needs to be. I’m tired of all the rhetoric. I’m tired of all the BS and the stuff coming from the left. That’s what I’m thinking," said Jenny Quinn.