Donations for Puerto Rico pour in from Orlando's Hispanic community 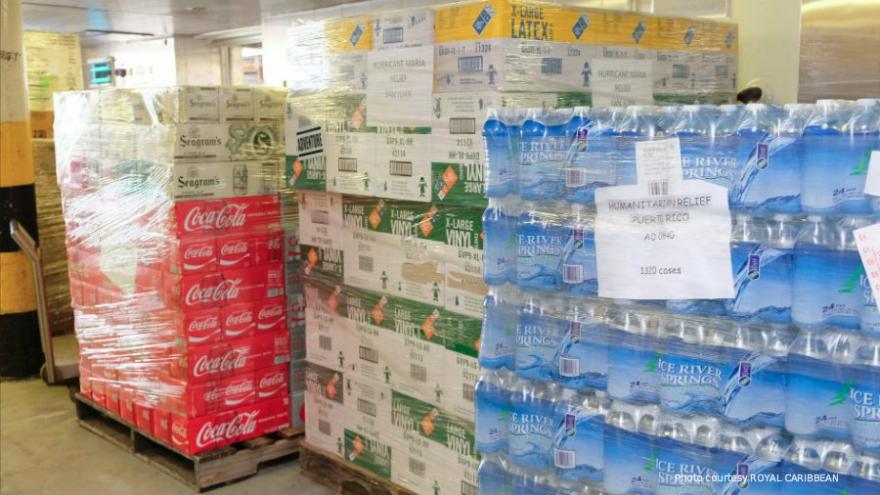 (CNN) -- On the eastern side of Orlando, in a heavily Puerto Rican community, donations are pouring in from people worried about family on the Caribbean island ravaged by Hurricane Maria.

A donation and coordination center has been set up to send much-needed food, water and supplies to Puerto Rico. A coalition of local Hispanic groups, CASA (Coordination, Support, Solidarity and Aid) has set up shop at a banquet and meeting hall.

Across Orlando, donations can be made at Harbor Community Banks, local businesses and the banquet hall -- Acacia's El Centro Borinqueno.

One shipping container already has been shipped and several more are planned to go next week.

Organizers are getting the message out through social media, local TV and radio stations. Several people sit around a table and work the phones, e-mails and social media to coordinate donations coming in from across Florida and other states.

'We are a very resilient community'

Volunteer Henry Cordero -- who owns a video production company, receives a phone call from a business in Clearwater -- just outside of Tampa, offering to donate seven pallets filled with batteries, car batteries and car inverters. Others in the room cheer.

Other companies have donated 12 long-distance radios and 700 batteries -- cellphone communication is almost nonexistent on the island. The coalition hopes the radios will help first responders or smaller communities talk to each other.

Cordero says others have been donating money, which is sorely needed since the cost of shipping the supplies is not cheap.

Throughout the day, people drop off donations in the banquet hall parking lot.

Luz Merced dropped off bottles of water and newly purchased supplies. She hopes it won't take too long to deliver the items to the island. Her family in Puerto Rico is in need of the supplies like most devastated by Hurricane Maria.

Soto says her family is doing well, so far -- despite their damaged homes.

Volunteer has yet to hear from parents

A successful businessman who did not want to be identified donated $20,000 worth of supplies, said Jose Colom, who has volunteered for days working outside in the parking lot accepting donations.

The man told Colom "he cannot sit at home and be with his family -- he is so blessed and see all the suffering of all the people in TV."

Colom, who owns parking lots in downtown Orlando, has not heard from his mother or father, Leonor and Jose Fernando, who live in Rio Piedras, Puerto Rico.

"Please call me, if you are alive call me -- that's all I want," he pleads, tears filling his eyes.

Across town in a warehouse district, pallets filled with water bottles, paper goods and nonperishable foods draw volunteers sorting and packing the items.

Named for the highway in Orlando, the organization, "I-4 to Texas" partnered with AmeriCorps and the Army National Guard to ship five loads of supplies to Texas. Later, they turned their attention to shipping supplies to the Florida Keys after Hurricane Irma and now they are focused on Puerto Rico.

Ross says currently they have enough supplies to fill 15 shipping containers, scheduled to go to Puerto Rico on Tuesday.

"What I've learned ... is how huge and substantial the Hispanic community is in central Florida," and how they have come together no matter their background, said Ross.

The cost of the shipping containers and all the shipping cost have been donated, said Ross. His biggest concern is how the goods will be distributed once they arrive in Puerto Rico.

Now called "I-4 for Puerto Rico," the effort has partnered with faith-based organizations and with the Pentecostal Church of God International Movement, which has 600 churches on the island.

A local pilot has already flown several flights to the island, delivering medical personal with medical supplies. Donations are continually coming in: A university in Ohio is sending batteries and flashlights, and a church in Georgia is send tons of nonperishable food.

Ross hopes through his political connections and with a distributor in Puerto Rico his shipments won't get caught in the bottleneck at the ports on the island.

One thing Ross says he keeps reminding people, "Puerto Ricans are Americans and this is what we need to do -- we need to help other people. So, put your ideologies aside and let's focus on helping the people in Puerto Rico."