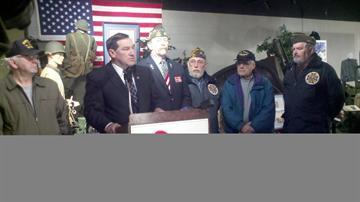 SOUTH BEND, Ind. – On Wednesday, Congressman Joe Donnelly announced that President Obama signed a bill into law that will appropriate $6,731,000 for an expanded VA Community-Based Outpatient Clinic in South Bend.

“It is past time for veterans in the South Bend area to have a more convenient health care facility that better meets their medical needs,” said Donnelly. “Since I came to Congress, this effort has been one of my top priorities, so I am pleased to announce that the authorization and funding for the new facility is now law.  The $6.7 million veterans’ health facility, expected to open in 2015, will mean that Hoosier veterans in our community will not need to travel as frequently to Fort Wayne, Marion, or Indianapolis to get the kind of care that most Hoosiers get close to home.”

Howard Wiseman, a Vietnam veteran and North Liberty resident said, “This new veterans’ health center will shorten my driving time for receiving care, especially for the hearing loss I have because of my time as an artillery gunner during the Vietnam War.  Other veterans also won’t have to drive across the state or ride a bus to receive care—and that can make an awfully long day for an elderly veteran.  It will be really nice to be able to get care here rather than in Fort Wayne or Marion. Thank you to Congressman Donnelly for his work for the veteran soldiers, sailors, and airmen in this area.  I don’t think that the average citizen realizes how much Joe does for us.”

The expanded VA Clinic will be housed in a 65,000 square foot facility, which is nearly 10 times the size of the current South Bend clinic.  Donnelly said it will offer primary care; expanded mental health care; laboratory, radiology, audiology, and pharmacy services; and outreach programs for veterans.

The VA expects to open the new facility in 2015.

The location of the South Bend facility has not yet been determined or announced.

At a press conference at the Studebaker Museum on Wednesday morning, Donnelly said this facility will serve veterans in all of the Michiana area from Niles, Mich. to LaGrange to as far as Porter County, and that all veterans in the local area will be welcome to receive medical treatment there.

ABC 57's Jillian Mahen was at Wednesday morning's press conference and will have more on this story, coming up on ABC 57 News at 6 & 7 p.m.

(Source: This information is from a press release, courtesy of Congressman Joe Donnelly.)