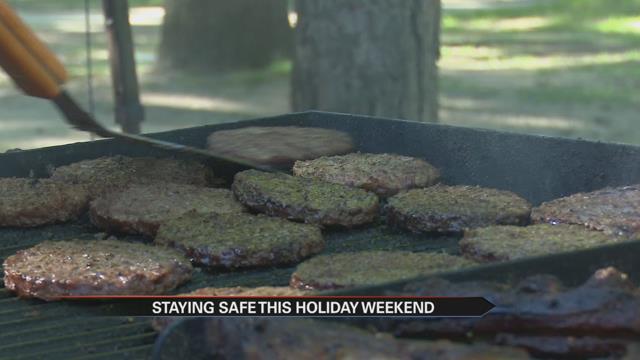 As you’re enjoying this Labor Day weekend, as always, experts and officials caution when grilling and driving home. Here are some safety tips.

The most important piece of grilling advice—which should be obvious—Chief Todd Hurley of the Clay Fire Department says, is to pay attention.

Otherwise, a fun day can quickly turn into a disaster.

“When I was younger, I put too much charcoal on the grill, and it burnt the whole front porch of my daddy’s house up,” Patton said.

That’s why it’s important to keep the grill three feet away from any building.

“Keep it away from the house, and especially one thing that goes unnoticed are deck railings behind the grill, so we want to keep the grill at least three feet away from those objects,” said Chief Hurley.

And Chief Hurley says many people forget that it’s illegal to grill on an upper floor patio in the state of Indiana.

“There are so many people in a small area, and then you add the wood deck to a second or third floor, and they’re usually a smaller deck, so the people aren’t within the area of three feet away from the building,” said Chief Hurley.

“A majority of the things we see are thermal burns from outside grilling,” he said.

“Don’t ever dump it out on the floor. Please people, don’t ever dump. Kids will run by here and burn their feet,” grillmaster Patton said.

Instead, let the professionals handle it—advice from both Patton and Chief Hurley.

“When I’m done, I make sure everything is cleaned out, wet, dried up, and leave it for the Park department to come out and get it and scoop it on out,” said Patton.

And after cooking out all day, Lieutenant Tim Williams of the Mishawaka Police Department urges you to get home safely.

“Use a designated driver, call for that taxi ride home, or Uber,” said Lieutenant Williams.

An added incentive for calling a cab is that police are setting up sobriety checkpoints at certain intersections throughout the weekend. There will also be an extra 15 to 20 officers out patrolling.

They’ll be in “intersections that are in the middle of high alcohol arrest and crash areas when it comes to alcohol. We want to try to get the center of it so we can stop it happening from all over,” said Lieutenant Williams.

Still, he says the most important reason to drive sober should be keeping yourself and other drivers safe on the roads.

“I’d rather pay $20 for a cab ride than $500 for a bond or worse, be involved in that horrific crash where someone’s been seriously injured or killed in that crash,” Lieutenant Williams said.