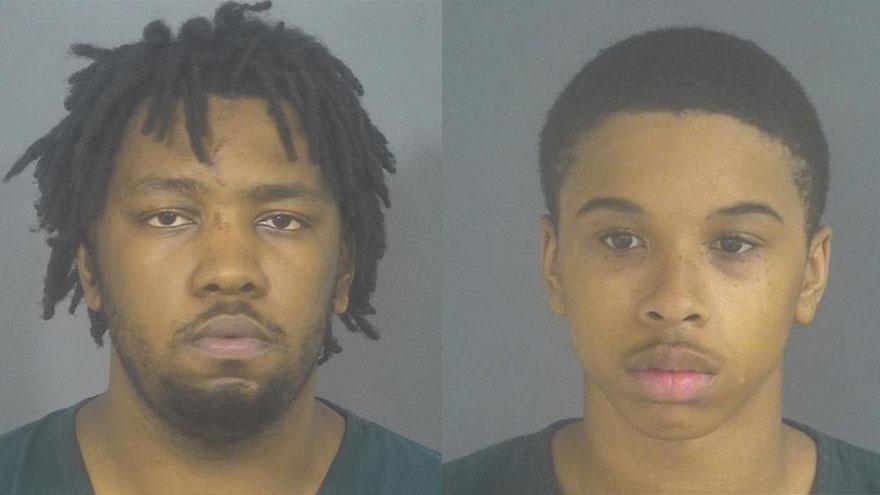 ST. JOSEPH COUNTY, Ind. -- Charges have been filed in the double murder at Waterford Glen Apartments on October 22. Court documents say the murders were part of an ongoing feud between the West Side and East Side gangs.

Darius Jamal Vaughn, 19 of South Bend, is charged with aiding, inducing or causing a murder and conspiracy to commit murder. He has also been charged with a criminal gang sentencing enhancement.

On October 22, just before midnight, South Bend Police were dispatched to the apartment complex for reports of shots fired and two men down, reports said.

When they arrived, police located ballistic evidence outside the apartments and a large amount of blood evidence inside the apartment as well as two men with gunshot wounds, according to the probable cause affidavit.

Malik Balderos was pronounced dead at the scene.

Ricky Kinds was pronounced dead at the hospital a short time later.

Investigators say Balderos and Kinds were associated with the East Side gang, the probable cause stated.

Evidence collected from the scene showed at least eight weapons were fired at the scene. Seven were handguns and one was a rifle.

Several of the weapons at the scene were involved in other open shooting investigations believed to be part of an ongoing and escalating rift between the East Side and West Side gangs, according to the probable cause affidavit.

Several weeks later, police got into a pursuit of a Dodge Journey registered to Vaughn. The suspects fled the vehicle, but it was impounded, reports said.

When Vaughn came in to claim his vehicle from impound, he was questioned about the pursuit and then about the double murder.

Vaughn admitted to being present at the shooting and the circumstances that led up to it, according to the probable cause affidavit.

Vaughn told police he and several friends were at a vigil mourning a West Side associate who was killed in October. Someone said “They gotta pay for this” and several of them got into three different vehicles searching for East Side people, reports said.

A Snapchat video showed several East Side guys together at an apartment with marijuana, reports said.

Vaughn said they ended up at Waterford Glen because they were looking for the “opposition” to hurt or kill them, according to the probable cause affidavit.

Vaughn said he drove one person to the complex and that person fired a shot from his vehicle, reports said.

After the shooting they all fled to one of their homes.

Davis also spoke with police and eventually admitted to going to the apartment complex to find and shoot East Side people for revenge of the death of one of their associates, according to the probable cause affidavit. Davis admitted to firing a handgun at the scene, reports said.

Both Davis and Vaughn are scheduled to be arraigned Friday at 1 p.m.