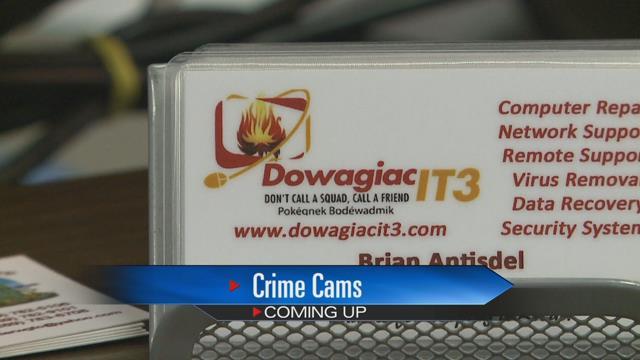 A business in Dowagiac is doing business in a different kind of way. Their goal is to give back to the community according to Dowagiac IT3 owner Brian Antisdel.

“I love this community and I will always give back on every occasion,” he said.

He has been in business for a couple years and just moved into his new building on Front Street. Dowagiac IT3 was previously located on Division Street.

Now he wants to do a different type of business and give back in another way.

“We're going to take a camera and put it on top of this building. It's going to be broadcast down the intersection or over just the general top of the city,” said Antisdel.

In the coming weeks, Antisdel will set up a camera on the top of his building. That camera will live stream in the direction of the South Front Street and Commercial Street intersection. He already has cameras set up to monitor his business.

It is a $3,000 camera that was given to him by Benton Metal Recycling after they got a new security system. He wants to give people a chance to see the city from a vantage point they may not get to see otherwise.

“The elderly who I really care about and see on a daily basis, many of them will say ‘well I'm not going to make it much longer and I never get to see town again,'” said Antisdel.

This camera could also help fight crime. He has talked to local police about the camera and they're on board too.

“If my camera can save someone then so be it, and if you're doing the crime, you got to do the time,” he added.

The footage will be kept for 30 days and given to law enforcement if the need arises.

The live stream will be viewable from www.dowagiacit3.com, which is in the process of being set up.