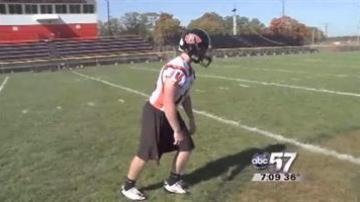 DOWAGIAC, Ind. – A local legend might not have broken the state record, but he is being recognized for another achievement.

ABC 57 first told you about Scanlon’s quest to kick a 60-yard field goal to break the state record. He fell a little short but did kick a 55-yard to break the school record.

Scanlon led his team to a district championship this year. He also played quarterback and linebacker. Kicking is his strong suit.

He's been recruited to kick by LSU, Alabama, Standford and Michigan State.