Dowagiac prays for its wounded soldiers 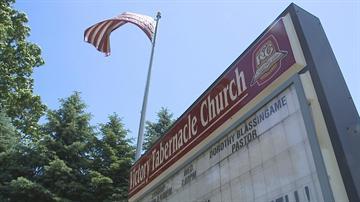 DOWAGIAC, Mich. - The American Flag is flown a symbol of pride at the Victory Tabernacle Church on Prairie Rhonde Drive in Dowagiac.

“I am very proud of it,” said Pastor Jerry Jackson. News of the attack on the 126th Cavalry Division in Afghanistan couldn’t hit closer to home for the pastor.

The Victory Tabernacle Church is directly across the street from the Armory, home base for the 10 wounded soldiers.

Jackson decorates his famous purple truck with stickers of support for service men and woman. He has two reasons; support for his neighbors, and his daughter just got back from Afghanistan herself.

Given Thursday’s news, Jamison is carrying a flag in Dowagiac’s Memorial Day parade Monday and dedicating his march to the men and women of the 126th.

“It makes memorial day mean more to you,” said Jackson. He’ll be praying for his neighbor’s safe return and thinking of the families. “We know how earthshaking it can be when it’s your kid or husband.”

The Michigan National Guard said a roadside bomb in Afghanistan wounded 10 soldiers based in the 126th division Sunday. Five have serious injuries, one lost his arms.