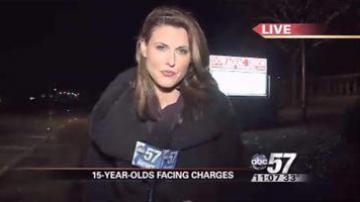 DOWAGIAC, Mich. -- A Dowagiac student is facing serious charges after getting expelled for bringing an Airsoft gun to the local high school.

Dowagiac Union High School went into lock down on the morning of Nov. 17 after a sophomore brought a toy gun to the school.

Cass County Prosecutor Victor Fitz says that last week charges were filed against two students from the high school because a toy gun is still considered a weapon when on school grounds.

"I heard he was bragging to them that he had a gun. Students didn't know it was a fake gun, so they went to the principal about it," says Brittany Williams.

Williams is a junior at Dowagiac Union High School and was in class when the school went into lock down.

"We were on lock down for about and hour. We had to turn off all the lights and stay quiet, we could work, we just had to stay quiet," says Williams.

Williams says the lock down lasted about an hour before teachers finally told students what was going on. "They just told us that somebody had brought a toy gun to school, so it was nothing huge."

Police and the school did not see it that way, though. That is why the 15-year-old student responsible for bringing the pellet gun to school was kicked out and charged with possession of a weapon in a school free zone, as well as resisting an officer.

A second student was also charged with possession of weapon in a school zone for having the same gun at one point as well.

"I don't think he should have been expelled or anything because it was just a toy gun, it wasn't real."

The prosecutor says a court date has not yet been set for the two 15-year-old students. It will be during the court hearing that officials will decide if the students will be charged as minors or adults.