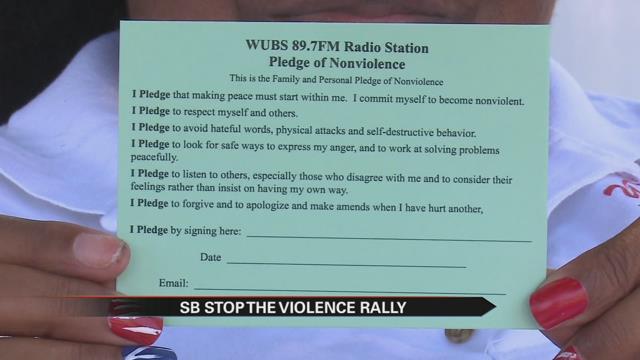 Less than 24 hours after a man was shot and killed in the streets of South Bend, dozens of community members gathered at Kennedy Park for a ‘Stop the Violence’ rally.

“Those of us who’ve suffered it, we can tell you that this is not the way,” Nikita Butler said before a crowd at Saturday’s event.

Butler and violence know each other all too well.

“My daughter’s father was killed through gunshot [sic], my nephew was shot a few years ago; just Thursday, I lost another nephew,” she said.

“This event is a picnic atmosphere with a purpose,” Reverend Sylvester Williams Jr., founder of Interfaith Christian Union and WUBS 89.7FM, said.

The purpose is defined by a pledge to live a violence-free summer – something attendees were asked to sign and commit to.

“Every day that you listen to the news, someone is getting killed,” volunteer Shelaine Mackey said. “And it’s just time to just stop.

As of Saturday evening, no arrests had been made in connection to Smallwood’s death.

Organizers at Kennedy Park spent the rally speaking out.

“We have to keep talking, keep walking, keep preaching, keep teaching and let people know that there is another way,” one preacher said.

Williams said the hope is to get a message across to the children of South Bend.

“We hope they’ll take away the idea that, to end violence begins with them,” he said.

“Where I grew up, I experienced a lot of hatred, violence, people getting shot and I really don’t want to see that happen to today’s youth,” Mcelroy said.

As children played basketball and food was served, other young community members took part in a spoken word contest at the event.

“Our children should be able to walk outside, express themselves, not run and hide!” one contestant said.

Everyone spent the afternoon speaking out, in hopes of bringing change.

“I know that I can’t reach everybody, but if we touch somebody who’s out there and they can reach someone who’s out there, then I think that makes a difference,” Butler said.

More than 50 people signed the pledge at Saturday’s rally and Williams said WUBS 89.7FM hopes to schedule more events throughout the summer.

A GoFundMe for the family of Bethel Smallwood has been set up and you can donate by clicking here.